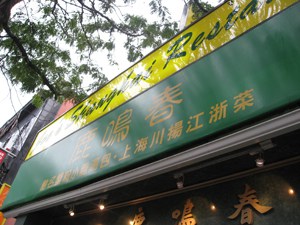 This is the second post in the series titled BlogHer’12 and Back.

When I visit New York I always make it a point to head to Flushing. I love Flushing because I have family there, I get my fill of great Chinese food, and I can’t get lost since the 7 subway ends in Flushing.  Not that I’m prone to getting lost, but I’m a bit OCD with directions, constantly checking and rechecking that I’m going the right way, even on the 7 subway.

One of my aunts was able to meet for lunch and since I wanted xiaolongbao (also written as xiu long bao and XLB) she took me to Joe’s Shanghai.

It wasn’t until I saw the photos, reviews, and plaques lining the entry walls that I realized Joe’s Shanghai was famous for xiaolongbao. 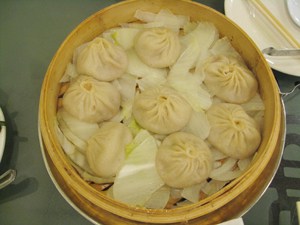 Tip # 1: Because xiaolongbao are made to order, place the order as soon as you’re seated.

Steaming hot, flavorful, with thick but not too thick skin, the only differences between the xiaolongbao from Joe’s Shanghai and xiaolongbao made in Shanghai are the cost and size.

Along with the xiaolongbao we ordered Beef with Green Beans and Fish. 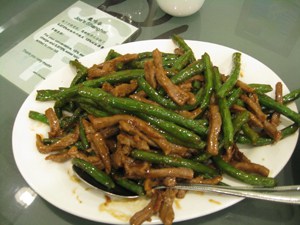 I was looking forward to the Beef with String Beans.  My local Ranch 99 hasn’t had Chinese Green Beans in years (or every time I’ve gone they’ve been out), the last time I had beef with string beans was in eight years ago when my aunt (the same one I had lunch with) cooked it when we were in Houston helping my mom during her chemotherapy treatments at M.D. Anderson.

What I wanted was ground beef with string beans.  Unfortunately, what I got was strips of beef with String Beans.

Despite the difference in what I had been expecting and what I received, the Beef with String Beans was delicious and the portion was large.  The downside: they were lukewarm and the beans were limp. 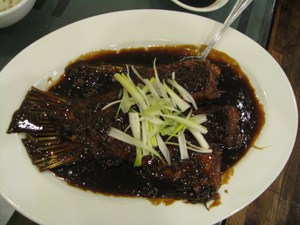 Fish – not sure which one from the menu…

Like the Beef with String Beans the Fish was flavorful, cold, and raw.  I love sushi, but not covered in Hoisin sauce.

Would I go back again? For the xiaolongbao definitely.  At $0.625 per bao, it’s cheaper than flying to Shanghai.

Tip # 2: Joe’s Shanghai Flushing is a cash only operation. No miles and points for you.

Since I had about an hour before I needed to head back into the city, we stopped by Fay Da Bakery for coffee.

Of course I had to pick up a few items for breakfast for the next few days.  Where else can you get a breakfast pastry for less than $2 each?

Better than a Bavarian Kreme donut from Dunkin’ Donuts, the Milk Cream Bun from Fay Da Bakery is an explosion of creamy filled goodness.

Picture the texture of a Pillsbury Crescent roll and you have the inside of a Sweet Topping Redbean Bun. The Redbeans were perfectly mashed to a paste.

The Walnut Swirl Chocolate Bun was a no brainer – one look at this and there was no question it was going on my tray and coming home with me. But would it survive the subway ride back to the Hilton…

Would I go back again?  In a heartbeat.  Not only were the baked breads delicious and inexpensive, but they were still just as delicious and moist after five days.