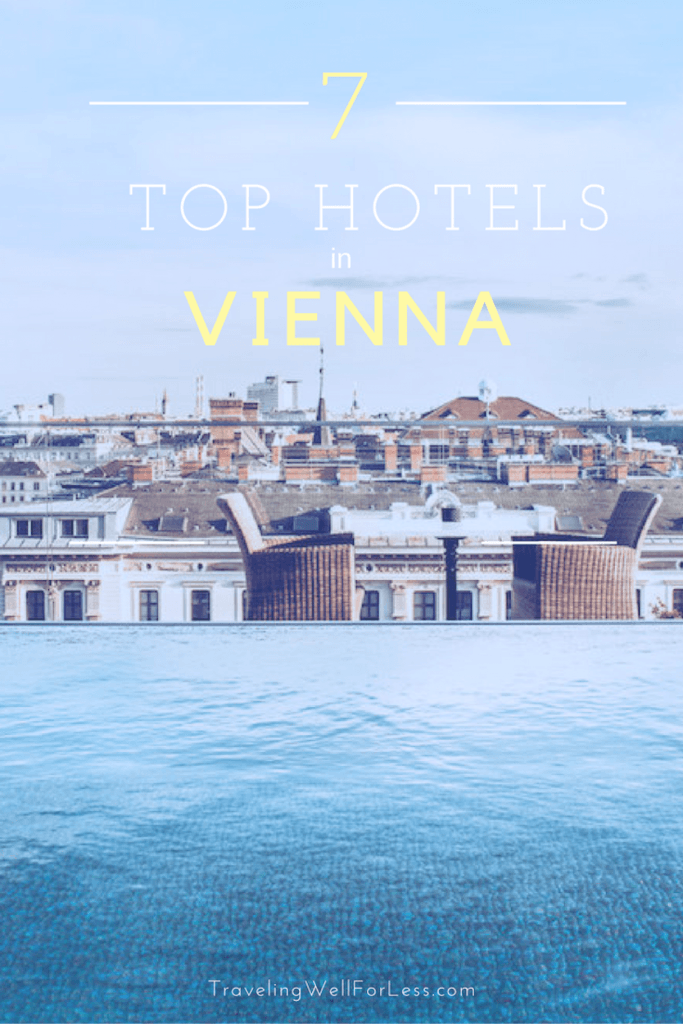 Vienna is Austria’s capital. And like most big cities, it’s made up of neighborhoods (districts). Whether you’re visiting for a few days, a week, or longer, the best district to stay in Vienna, Austria is the city center, Innere Stadt, Vienna’s first district.

By staying in the city center, you’ll be closer to the sightseeing, attractions, and shopping. And lucky for you, lots of hotels.

Because there are so many hotels, I saved you a bunch of work and narrowed down the list to the seven best hotels in the Vienna City Center.

You’ll find everything from luxury to budget accommodations to hotels with checkered pasts as a former brothel, spy headquarters, and more in our pick of the best hotels in Vienna, Austria.

Here are other articles to help prepare you for your trip to Vienna:

Where to Stay in Vienna, Austria: Top 7 Hotels

There are hotels for every budget in Vienna, Austria. From the money is no object to the I’m pinching pennies traveler, you’ll find several Vienna city center hotels that meet your needs.

Here are some of the best places to stay in Vienna. There are many amazing hotels in Vienna such as the Ritz-Carlton and the Hotel Sacher Wien (home of the famous Sacher torte).

But these seven hotels are unique each with a history, unlike any other hotel. I included links to rates and reviews so you can find the best hotel rates in Vienna for your travel dates. 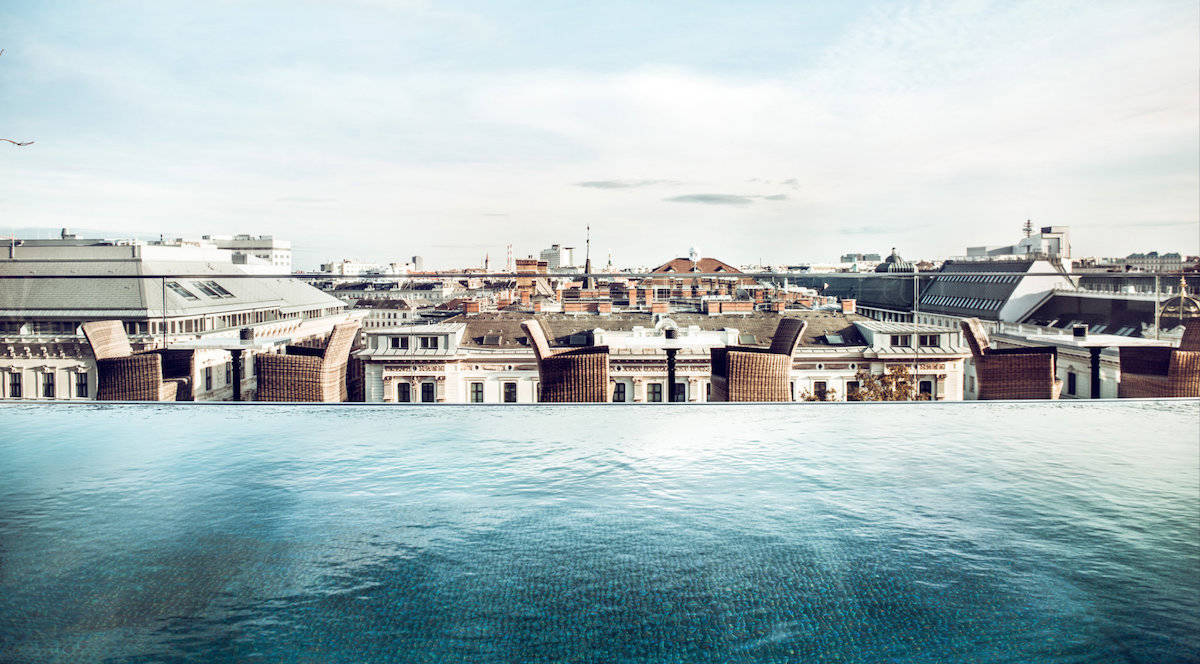 If only these walls could talk. Housed in the former headquarters of the Austrian Secret Service, the Grand Ferdinand is an 188 room boutique hotel on Ringstrasse, just minutes away from the Vienna State Opera and St. Stephen’s Cathedral.

But don’t let the word “luxury” scare you, there are rooms for every budget, including luxury hostel dorm rooms.

Highlights of this hotel include a rooftop infinity pool (summer only), tropical garden, fitness center, and seventh-floor suites with views of the giant Ferris wheel (Wiener Riesenrad). Free Wi-Fi throughout the hotel including the rooms and dorms is included.

If staying in former spook building doesn’t get you revved up, you can rent the Jaguar owned by Formula 1 legend Niki Lauda’s grandfather or a Maserati Quattroporte (winter).

Pro-tip: No coffee maker or tea pot in room. 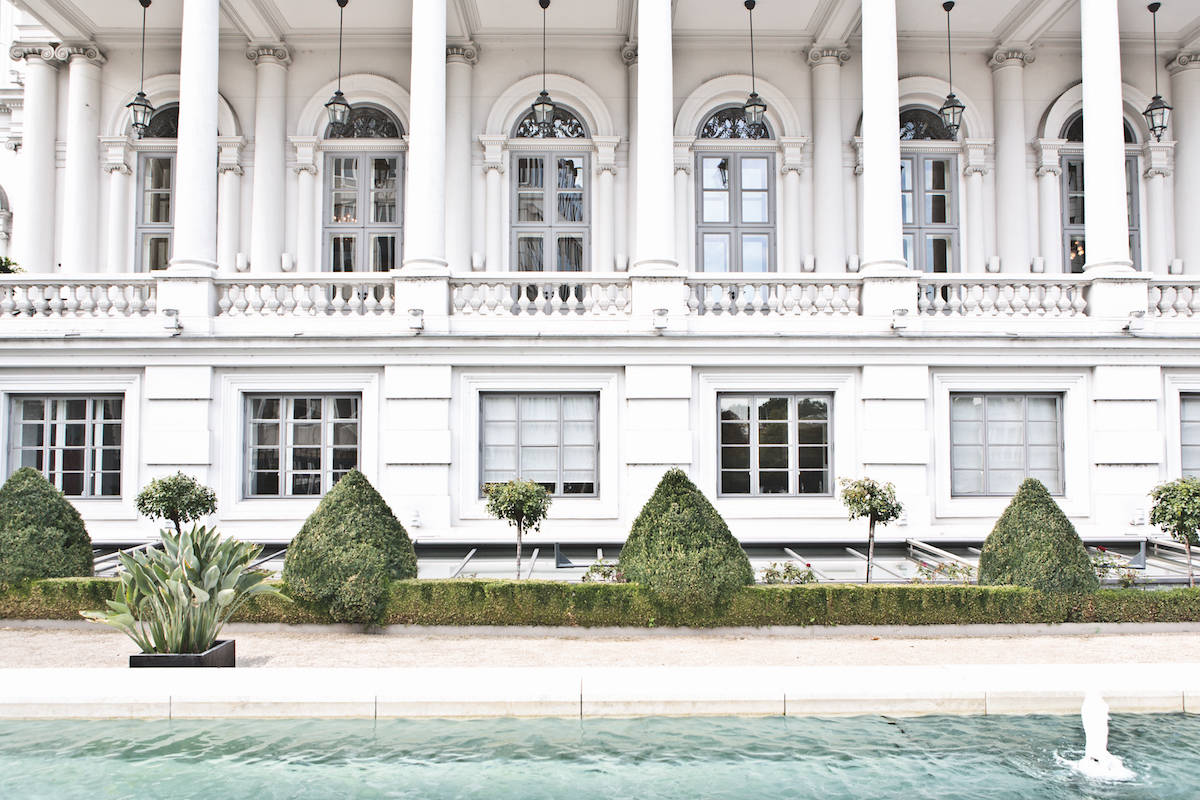 Ever dreamed of sleeping in a palace? You can when you stay at the Palais Coburg Residenz.

The former palace once occupied by Russian soldiers during World War II is a luxury boutique hotel of 32 suites each uniquely decorated and named after nobility.

And we’re not talking suites, like Embassy Suites. But suites that invoke visions of grandeur. One and two story suites complete with a kitchen.

Hotel highlights include the two-Michelin-starred Silvio Nickol restaurant (reservations required), six wine cellars, garden, and a glass-enclosed restaurant in the garden. A la carte breakfast and free Wi-Fi throughout the hotel including in the suites is included.

Don’t expect to wander around aimlessly if you aren’t a guest at the Palais Coburg. Security is tight, possibly because of their safety deposit box rentals in the vault room.

Pro-tip: Some suites are two levels so review the floor plan if you have mobility issues before booking your room. 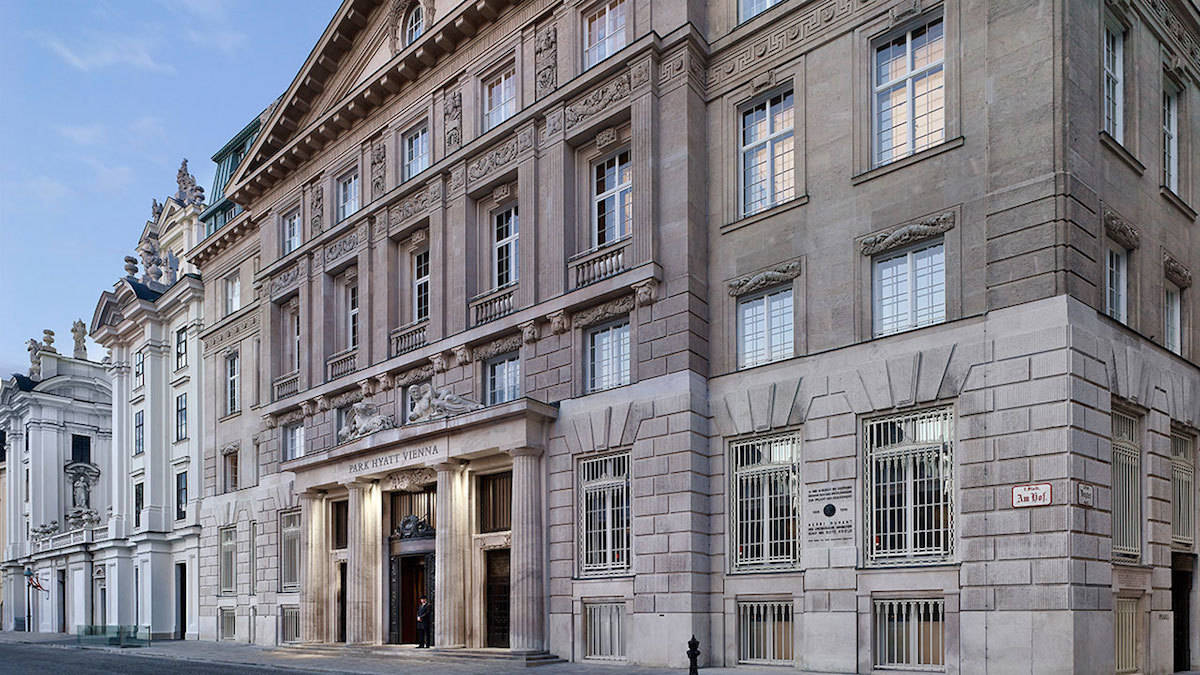 You’re surely thinking, “Wait, what? In the top 7 hotels in Vienna, one of the oldest cities in Europe, you’re including a Park Hyatt?” Yes, yes, I am. Here’s why…

Location, location, location. The Park Hyatt Vienna is steps from the finest shopping. Chanel, Louis Vuitton, Yves St. Laurent and Prada are literally around the corner.

Prior to being converted into the Park Hyatt Vienna, the building was a bank.

Despite its stuffy beginnings, the Park Hyatt Vienna is far from boring and staid. A Coco Chanel inspired staircase leads you from the lobby to the Pearl bar.

Where else can you swim in a former bank vault lined with gold bar shaped tiles?

Hotel highlights include indoor pool built in the bank vault. Free Wi-Fi throughout the hotel including the rooms is included.

We stayed at the Park Hyatt Vienna and absolutely LOVED it!

Pro-tip: The breakfast buffet is worth it. Get up early or you may find yourself lingering until late morning.

The Grand Hotel Wien has a long storied history. It was the first luxury hotel in Vienna and was the meeting place for the secret love affair between Crown Prince Rudolf of Habsburg and Baroness Mary Vetsera which resulted in a murder-suicide.

Despite the role the Grand Hotel Wien played in the eventual end of the Habsburg dynasty, the 50-year celebration of the waltz was held at the hotel.

And for 10 years after World War II, Russian troops lived at the hotel. Ironically, the Grand Hotel Wien was the former headquarters of the International Atomic Energy Agency which advocates peaceful use of nuclear weapons.

Highlights of the hotel include the Michelin-starred Le Ciel by Toni Morwald restaurant and a block from the Opera House. Free Wi-Fi throughout the hotel including the room.

Pro-tip: If you have allergies, ask for a refurbished Superior Room (they have wood floors instead of carpet). 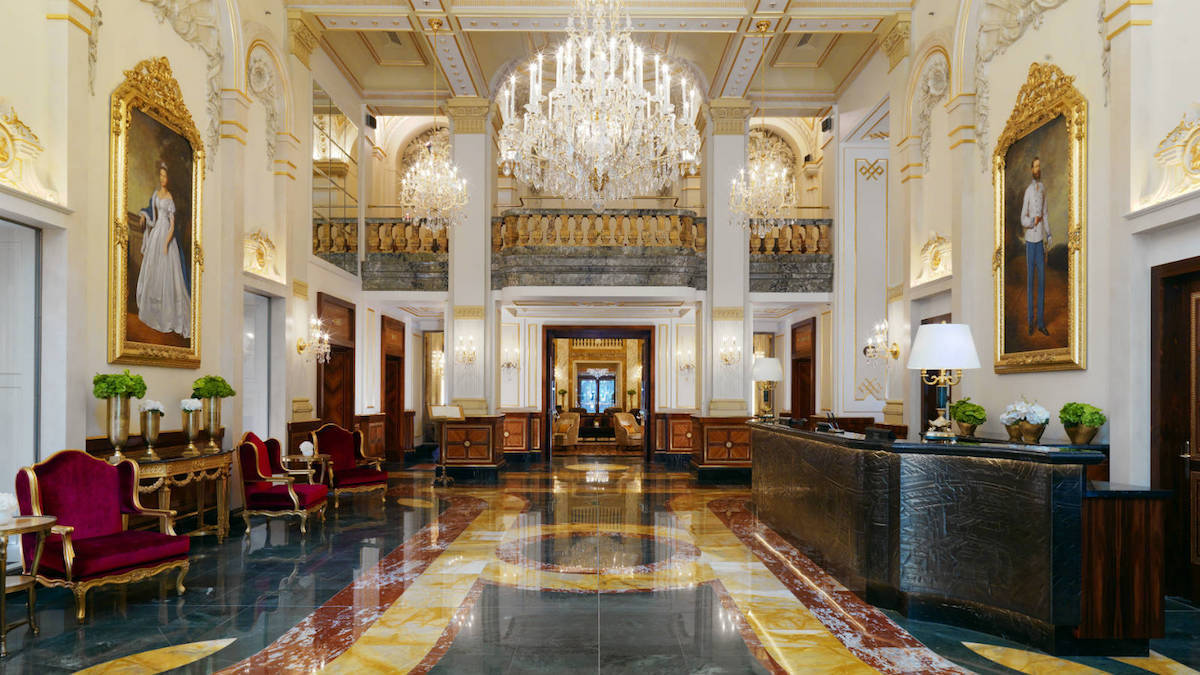 The former home of the Duke Philipp of Wurttemberg, the Hotel Imperial is believed to have employed Adolf Hitler during his youth.

Because of its central location in the heart of the city and close to all attractions, the Hotel Imperial was the headquarter for the Russian military after World War II.

The hotel has housed dignitaries like Queen Elizabeth II and was where Simon Wiesenthal (concentration camp survivor who dedicated his life to hunting Nazis) celebrated his 90th birthday.

Hotel highlight is the Imperial Torte (tart) chocolate truffle provided to all guests.

Pro-tip: The Hotel Imperial is the only hotel in Vienna that offers personal butler service. 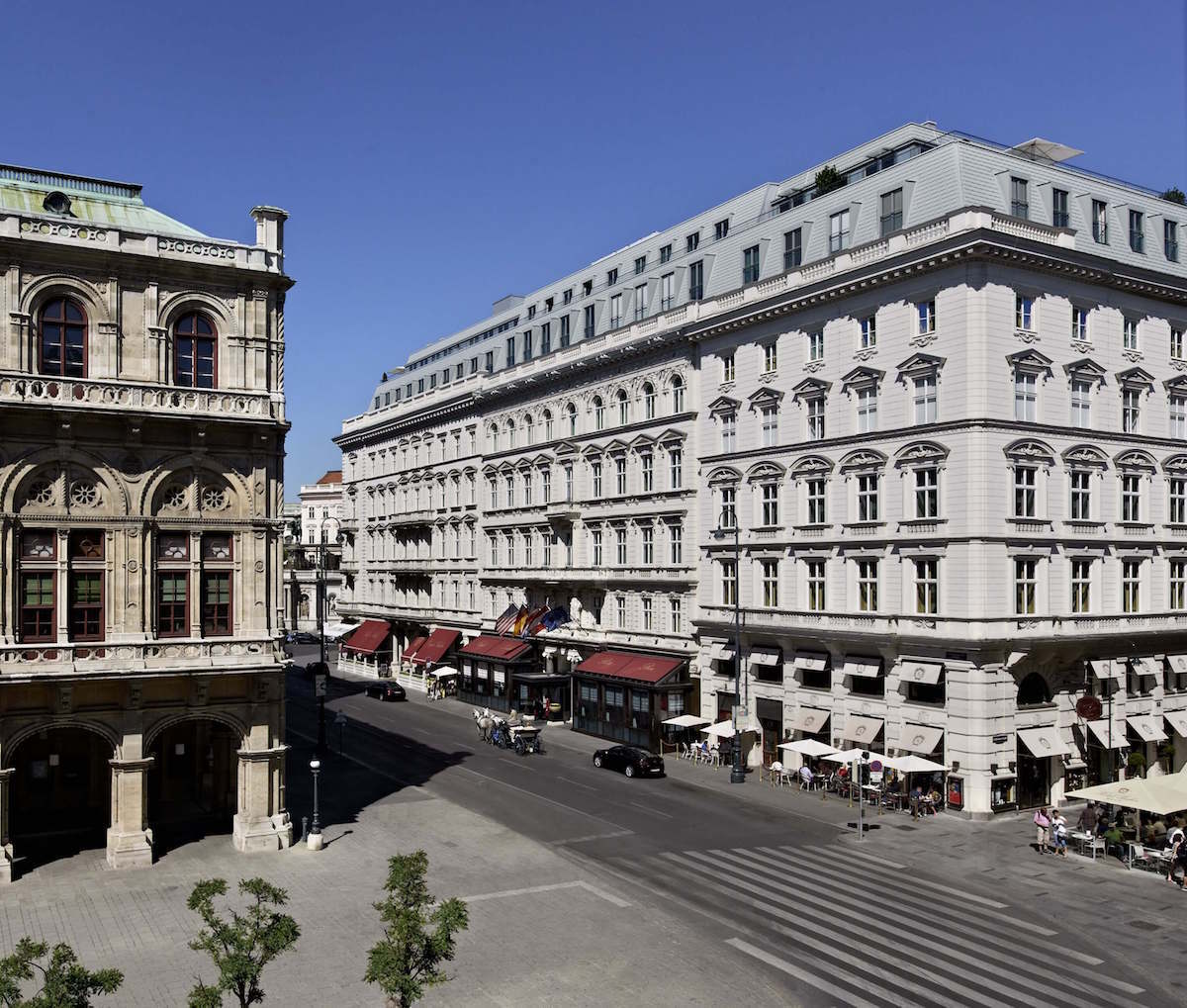 The decor at the Hotel Sacher Wien is a blend of old and new. And like many of the first hotels in Vienna, it was occupied by the Russians after World War II.

Used as a horse stable by the Russians, the Rote Bar is now a restaurant. Directly across from the Vienna State Opera, you won’t have far to walk to see a performance.

Hotel Sacher Wien was the inspiration for the movie, “The Third Man.”

Highlights of the hotel are the Sachertorte and 19th-century art gallery. Free Sacher kids program suites named after operas

The Hotel Karntnerhof is a 44 room boutique hotel near St. Stephen’s Cathedral that was once a brothel after World War II.

Hotel highlights are the rooftop terrace with city view and art collection. Free breakfast buffet and Wi-Fi are included.

Pro-tip: The hotel private parking lot is only open from 6 am to 9 pm.

If you’re wondering where to stay in Vienna, Austria and want to stay at the top hotels, you’ve come to the right place.

The hotels were selected because of their central location close to shopping, attractions, and public transportation.

But also for their unique past like a former spy headquarters to the meeting place for a secret love affair that ended in a murder-suicide.

Read these posts before your trip to Vienna:

What are your favorite hotels in Vienna?

Pin this to your Austria, travel, or vacation board: 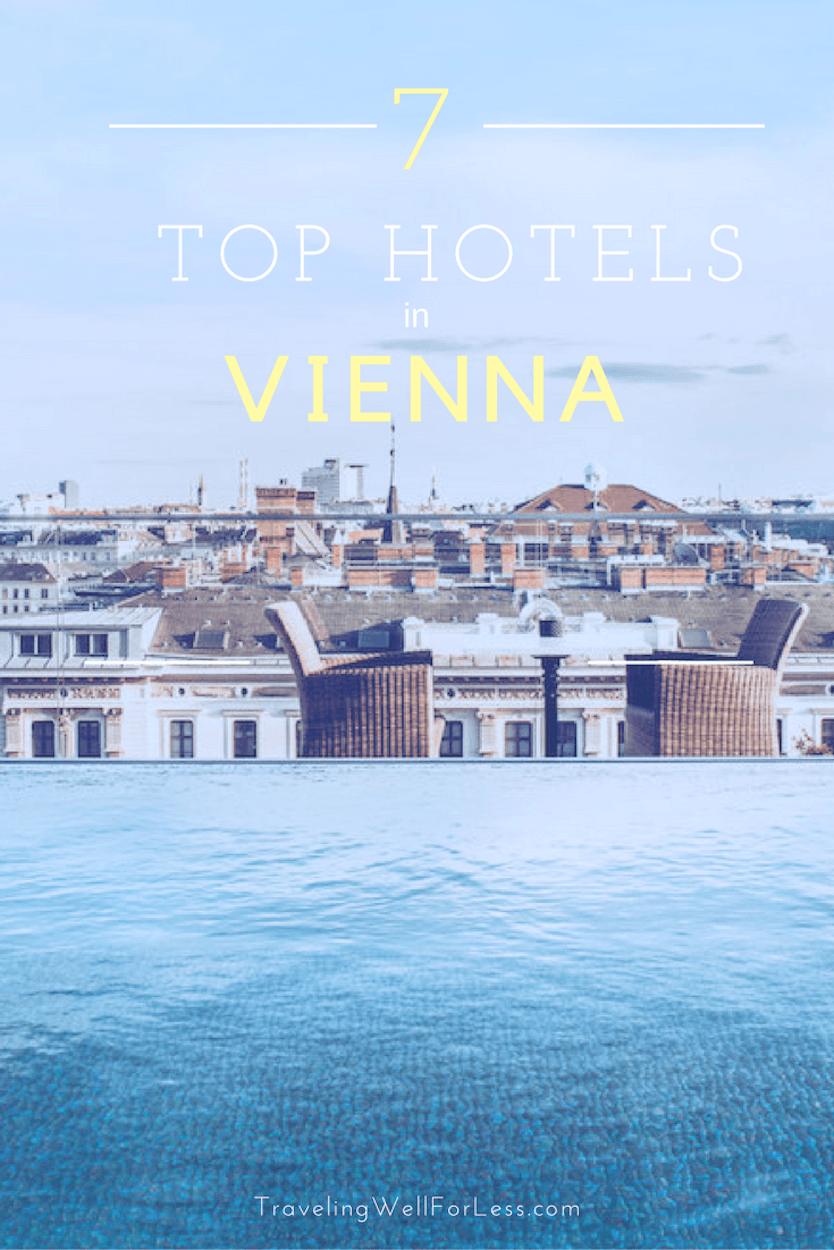 Vienna is such a beautiful place, I would love to go! These photos and hotels look incredible!

Dream destination right there! I would love to stay at the Palais Coburg Residenz. It looks so luxurious!

Sounds like a good place to visit and the hotels was so nice. I'd love to go there soon

Ooooo so many fabulous places to stay in Vienna!!! I have never been, but hopefully my travels take me there one day!

Thanks for these awesome tips. I want to travel with my husband so badly! One day we will be able to vacation somewhere beautiful like this!