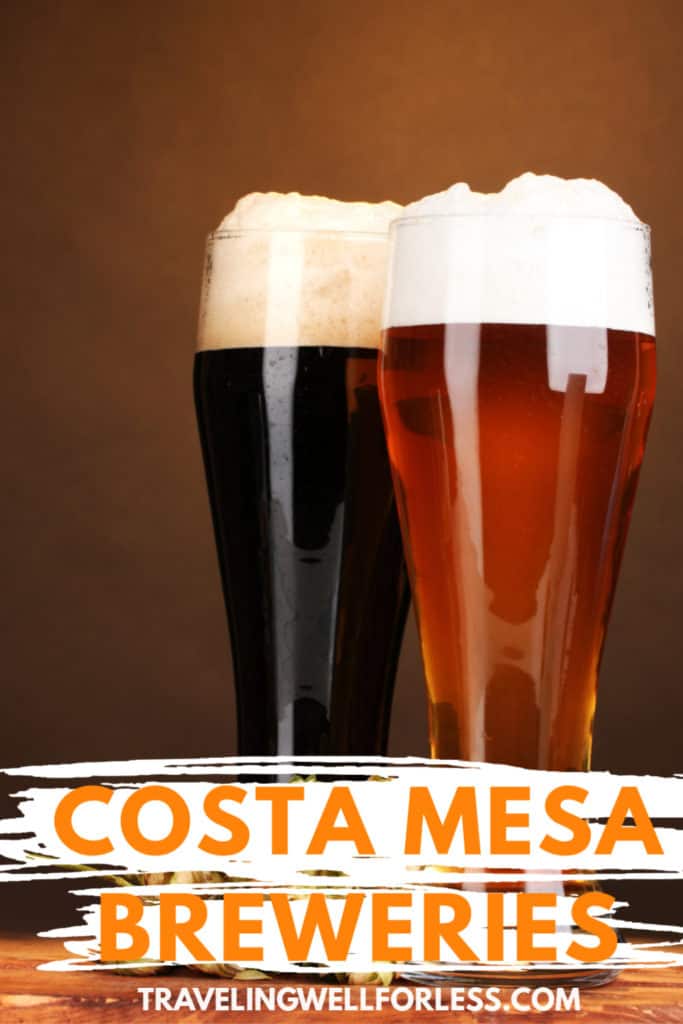 Looking for things to do in the “City of the Arts” that’s not shopping or food? Check out these six Costa Mesa breweries. In a city of only 15.81 square miles, that’s a brewery every 2 miles!

It gets better. All but two of the breweries are within walking distance of each other. Time to plan a trip to this part of Orange County, California to check out all the breweries in Costa Mesa.

Even if you aren’t a huge craft beer fan, you can find a favorite beer or two.

I have a confession to make. I haven’t always loved beer.

Sure, I drank it in college and as a young adult but it was never my go-to drink. Until I went on a Denver brewery tour several years ago. The stouts and porters won me over and I’ve been a dark beer convert ever since.

Now I seek out the craft breweries in every city I visit. Earlier this year, there were only four breweries in Costa Mesa, now there are six. Listed by location, use this as a guide for your walkable Costa Mesa brewery tour.

Costa Mesa Breweries Six Places to Get Your Beer On 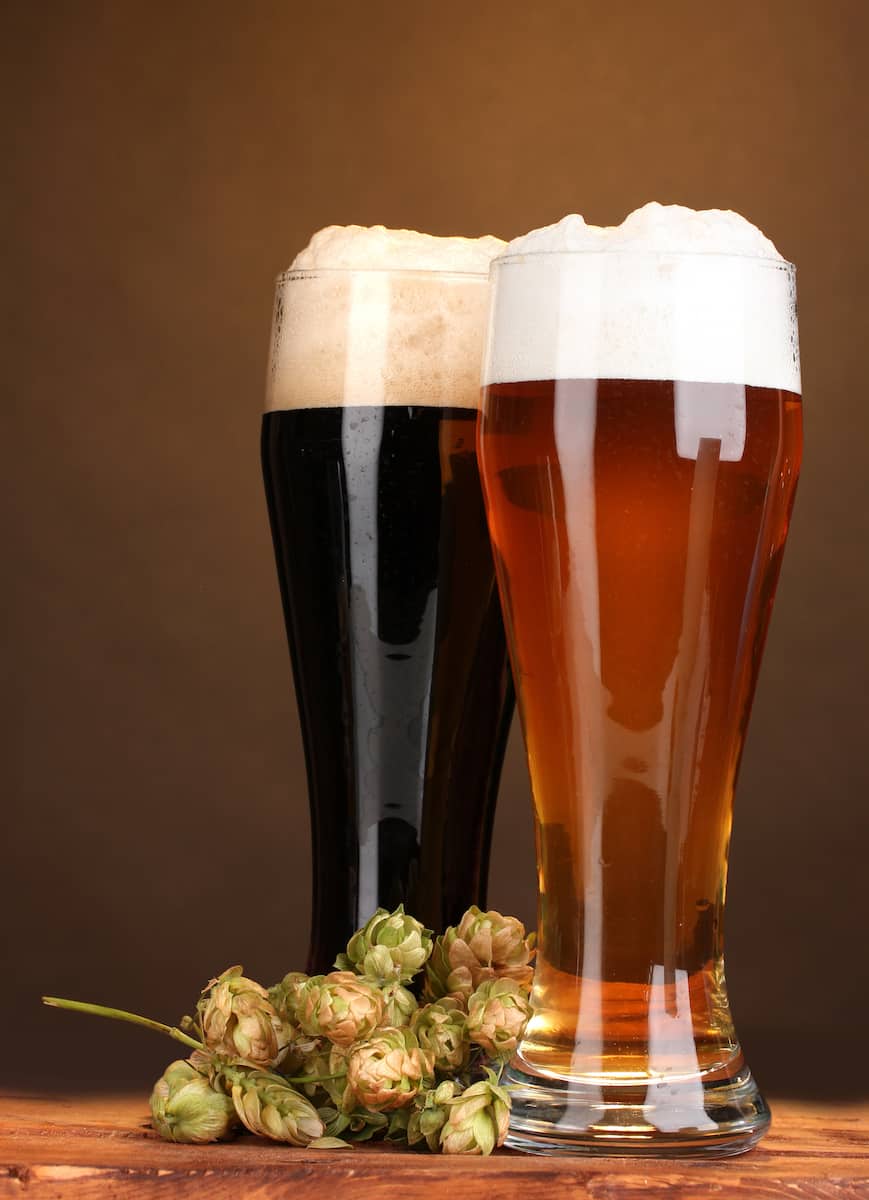 While your partner gets their shopping on at South Coast Plaza you can enjoy a pint or two at one of these Costa Mesa breweries.

Follow this guide that starts at Bootleggers Brewery at The LAB Anti-Mall and ends at Karl Strauss Brewery near South Coast Plaza.

Pro-tip: You can visit the two newest Michelin starred restaurants in Costa Mesa Hana Re Sushi and Taco Maria on this brewery tour. Use this guide to find all the Michelin restaurants in California.

When planning your trip keep in mind that Hana Re is Sushi only open for dinner while Taco Maria is open for lunch and dinner. 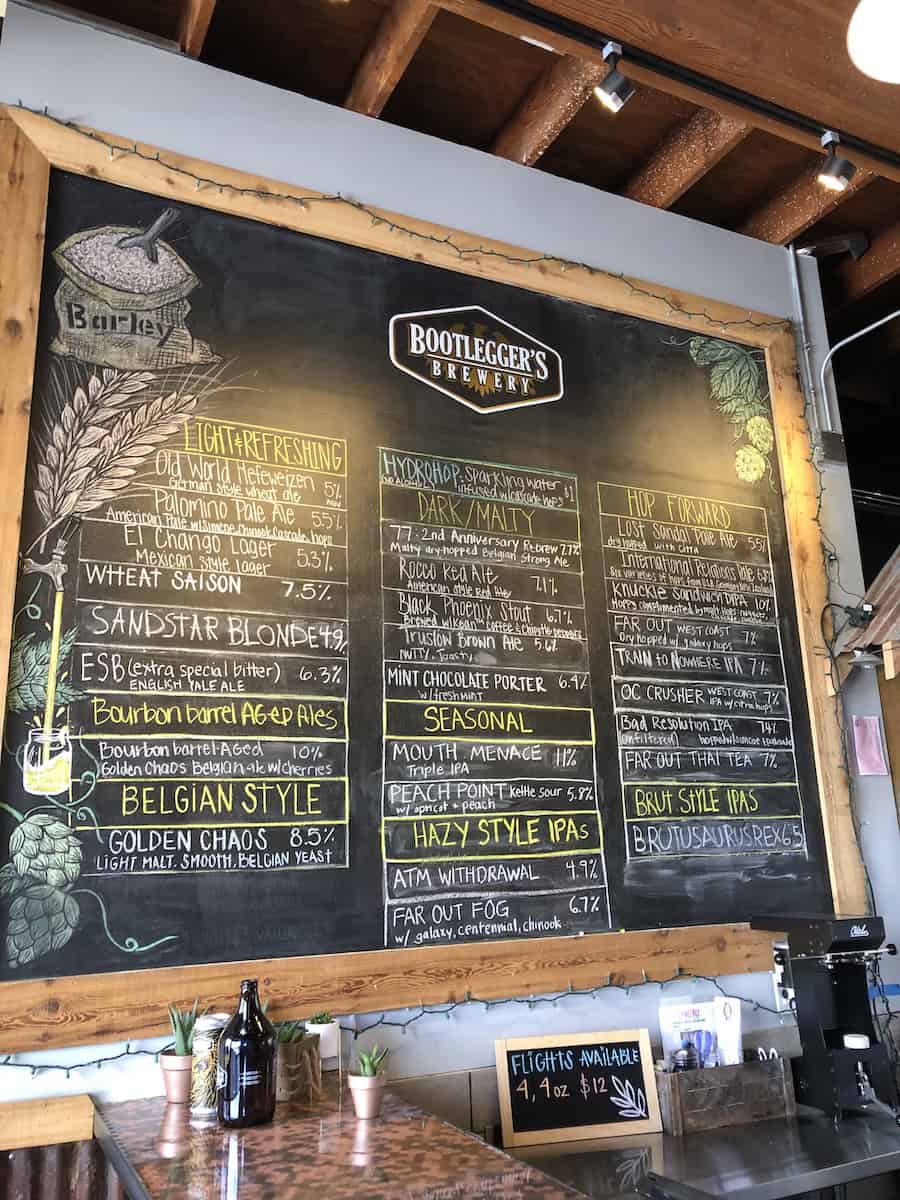 A beer for every palate

With 28 taps, Bootleggers Brewery is the largest independent craft brewery in Costa Mesa. They offer a variety of beer styles for every taste, from IPAs to stouts, and almost everything in between.

I ordered a pint of the Mint Chocolate Porter and Jeff got a Train to Nowhere IPA. I tried a taste of the Black Phoenix Stout but with the chipotle was too spicy for me 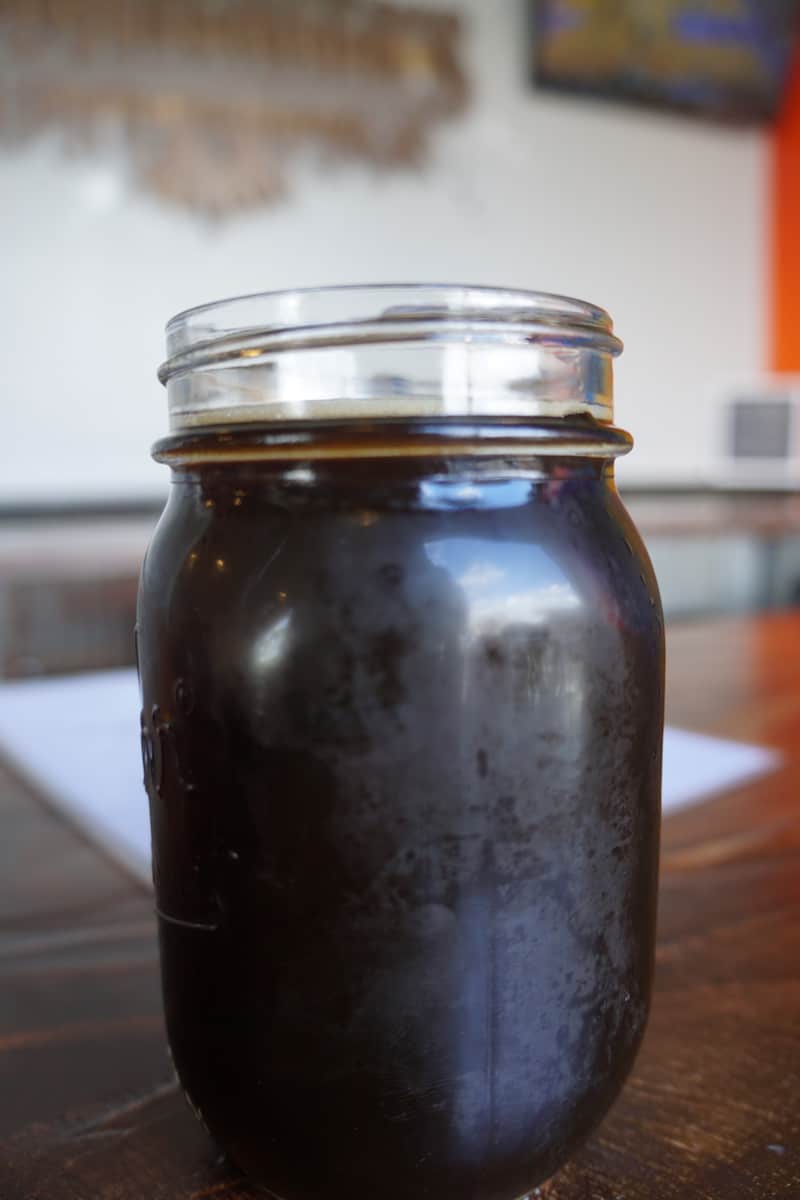 Served in mason jars the presentation was cute and appropriate for the hipster, eclectic setting of The LAB Anti-Mall. The porter’s maltiness wasn’t overshadowed by the chocolate notes and mint.

This dog-friendly brewery has indoor and outdoor seating.

Pro-tip: You can have food delivered to the brewery. 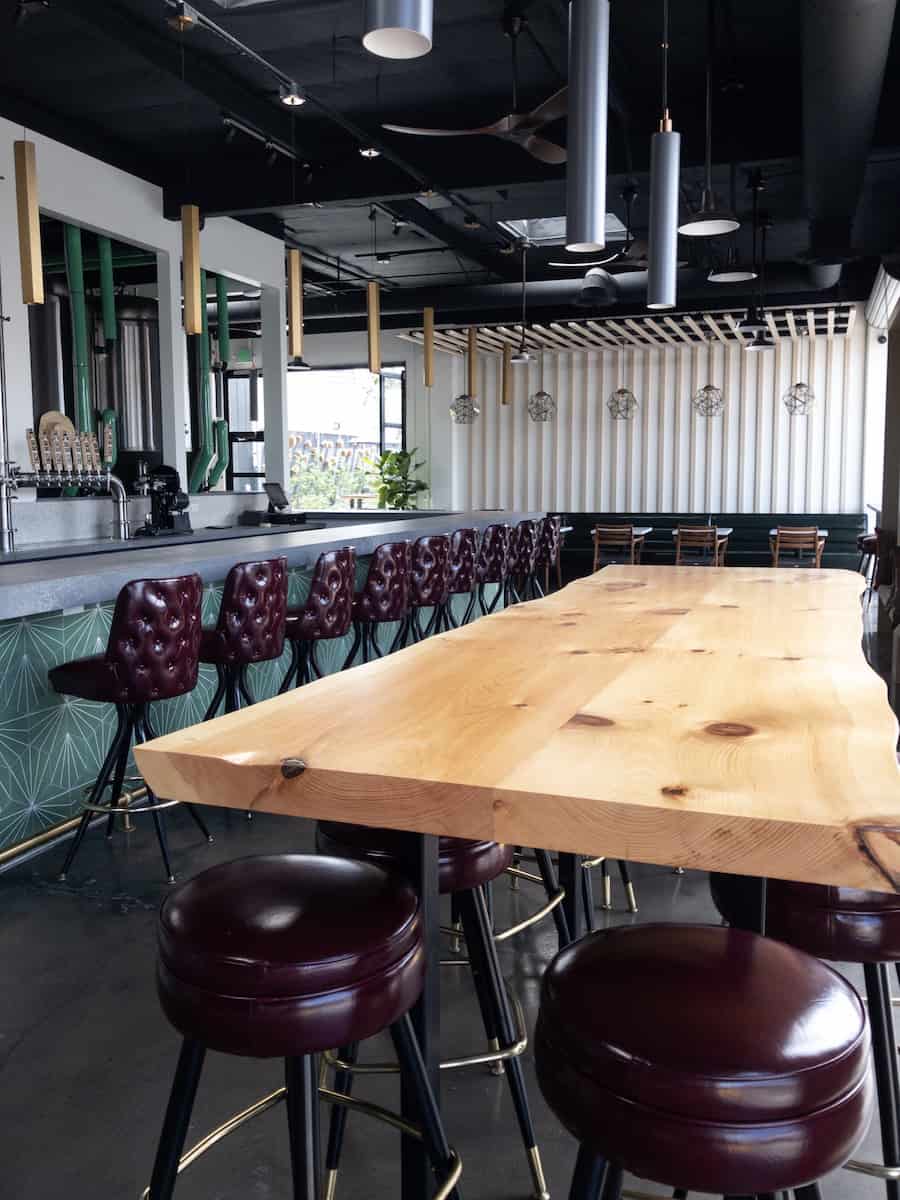 The newest of the Costa Mesa breweries, Salty Bear Brewing is steps away from The CAMP. You can step through the space between Taco Aslym and Old Vine Kitchen & Bar buildings into the Salty Bear Brewing’s parking lot.

Salty Bear Brewing’s name is a playful tribute to the beach and the California grizzly bear. The decor is neither beachy or Californian but an interesting mix of styles. A giant dream catcher and teepee could be a nod to the original inhabitants of Costa Mesa, the Lukup Indians.

Belly up to the bar, shared hightop wood table, booths along the wall, window box seats, horseshoe table outside, or picnic tables. The seating options are almost endless.

If you like hops, you’ll love Salty Bear. The brewery offers 11 beers on tap and a twelfth coming soon most of which are IPAs and ales. The only dark beer on tap is a porter. 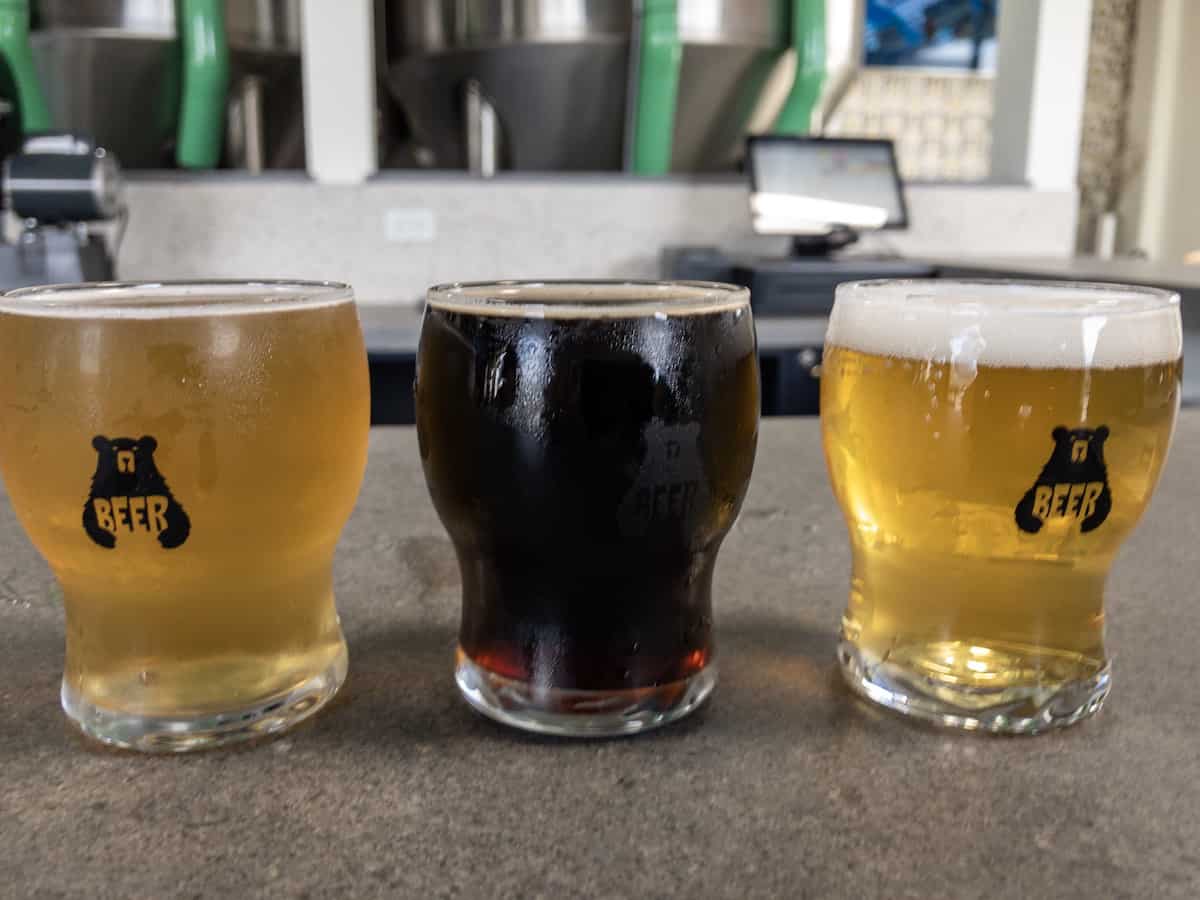 I ordered three tasters. The Gnarwhal Blonde Ale was very hoppy. The Bomber Toasted Coconut Pale wasn’t too hoppy and offered a hint of coconut. The Half Full Porter was delightful with chocolate and malt flavors.

Pro-tip: The brewery is at the back of the building and not visible from the street. The driveway leading to the brewery is on Randolph across from Auto Mechanics. 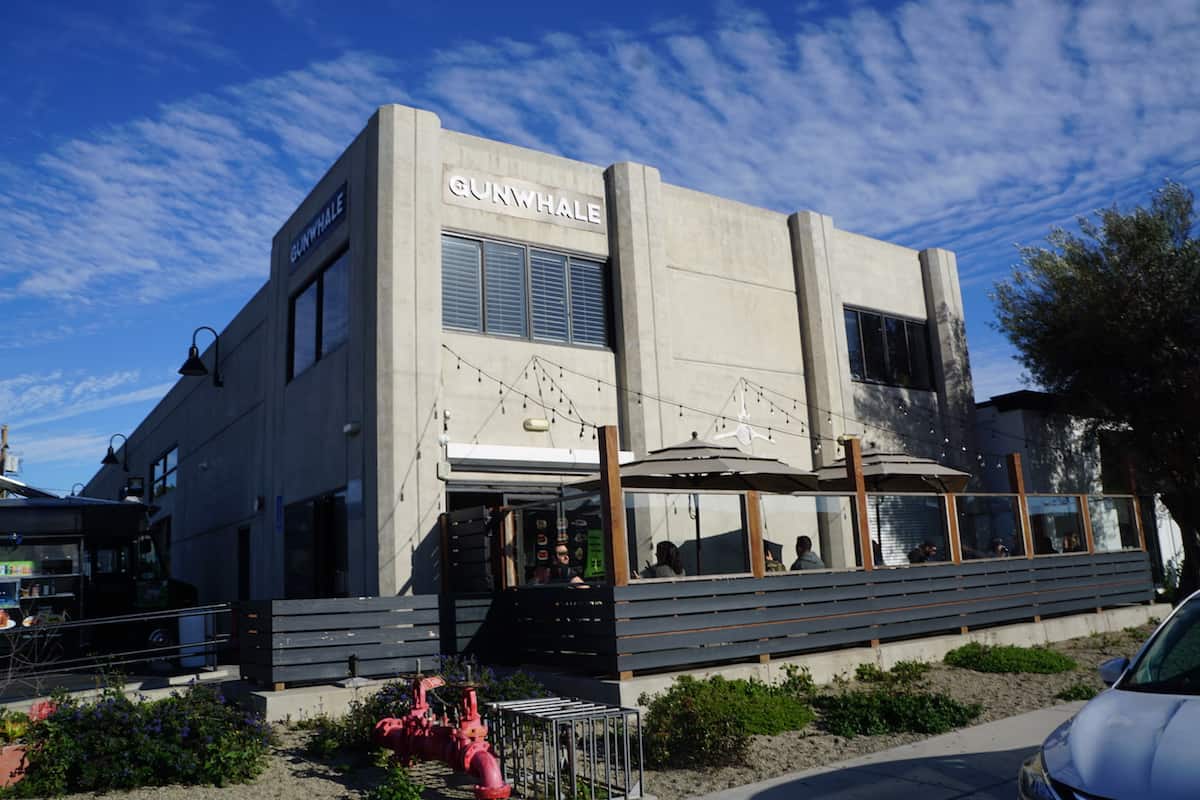 Gunwhale Ales is a short two-minute walk from Salty Bear Brewing in the next set of buildings.

Despite the nautical themed name, the decor is anything but maritime. The schoolroom styled wood chairs, threshing tools on the wall, and mounted deer head give off a midwest hunting lodge vibe.

When we visited they only had IPAs and ales on tap. Hopefully, next time we’ll get lucky and they’ll have one of their stouts on tap. 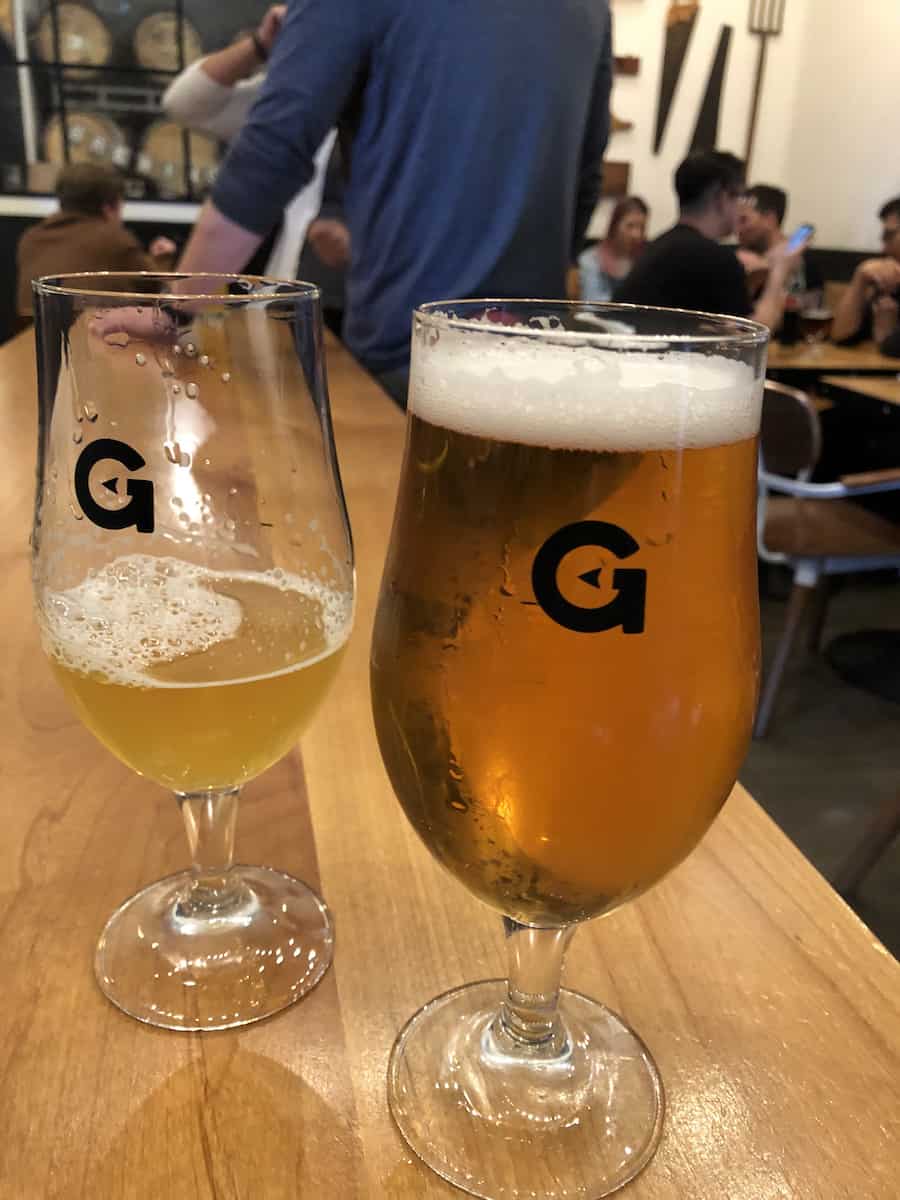 Half pours and tasters are served in the same sized pint glass.

Pro-tip: This is one of the smaller breweries so seating is at a premium. 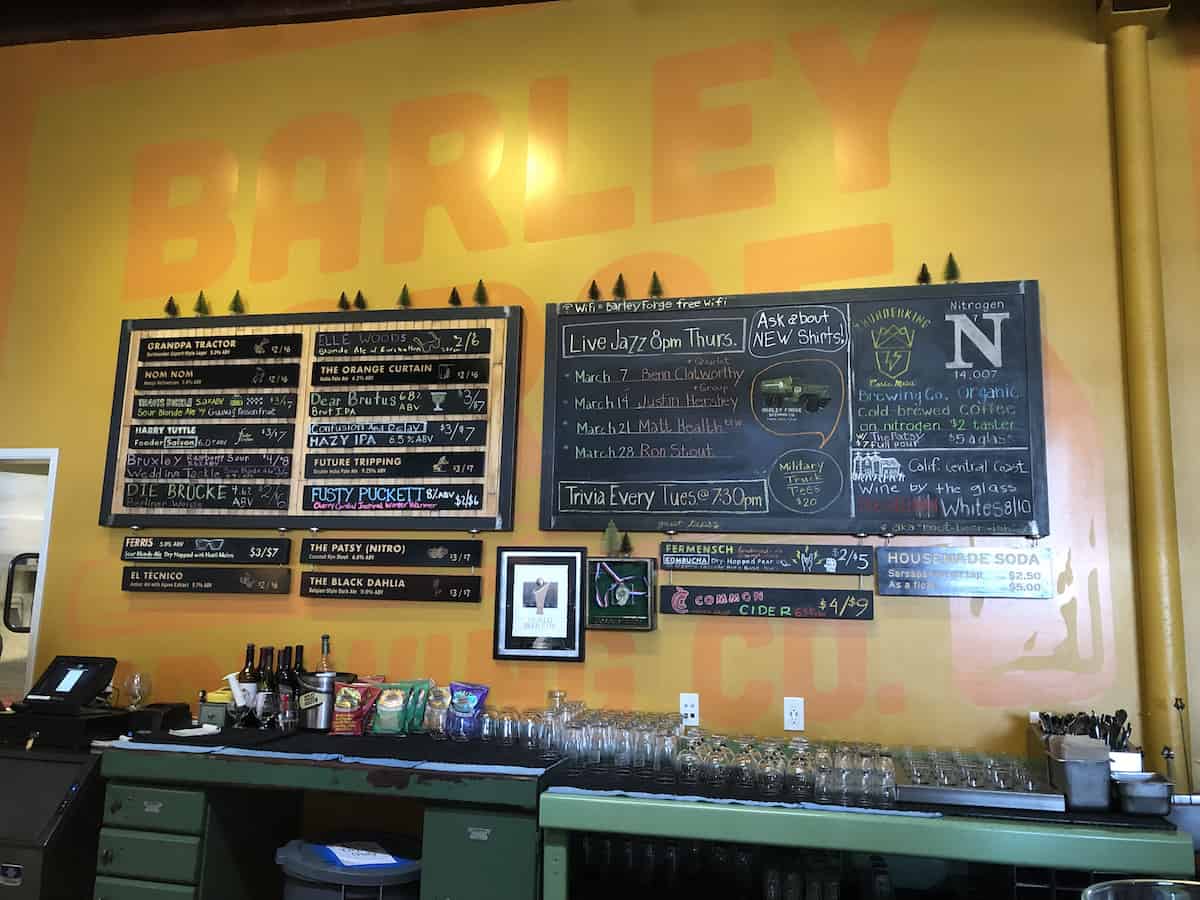 Had your fill at Gunwhale Ales? Cross the street and pay a visit to the tasting room at Barley Forge Brewing Co.

By now you may need a little snack to soak up all that beer. Barley Forge Brewing Co. has a reasonably priced food menu and kitchen that’s open seven days a week. I recommend the Beer Brat with tater tots and the Cuban.

With 18 beers on tap Barley Forge offers a variety of beers including Grandpa Tractor, a Dortmunder Style Export Lager Gold Medal winner and The Patsy, a Rye Coconut Stout. 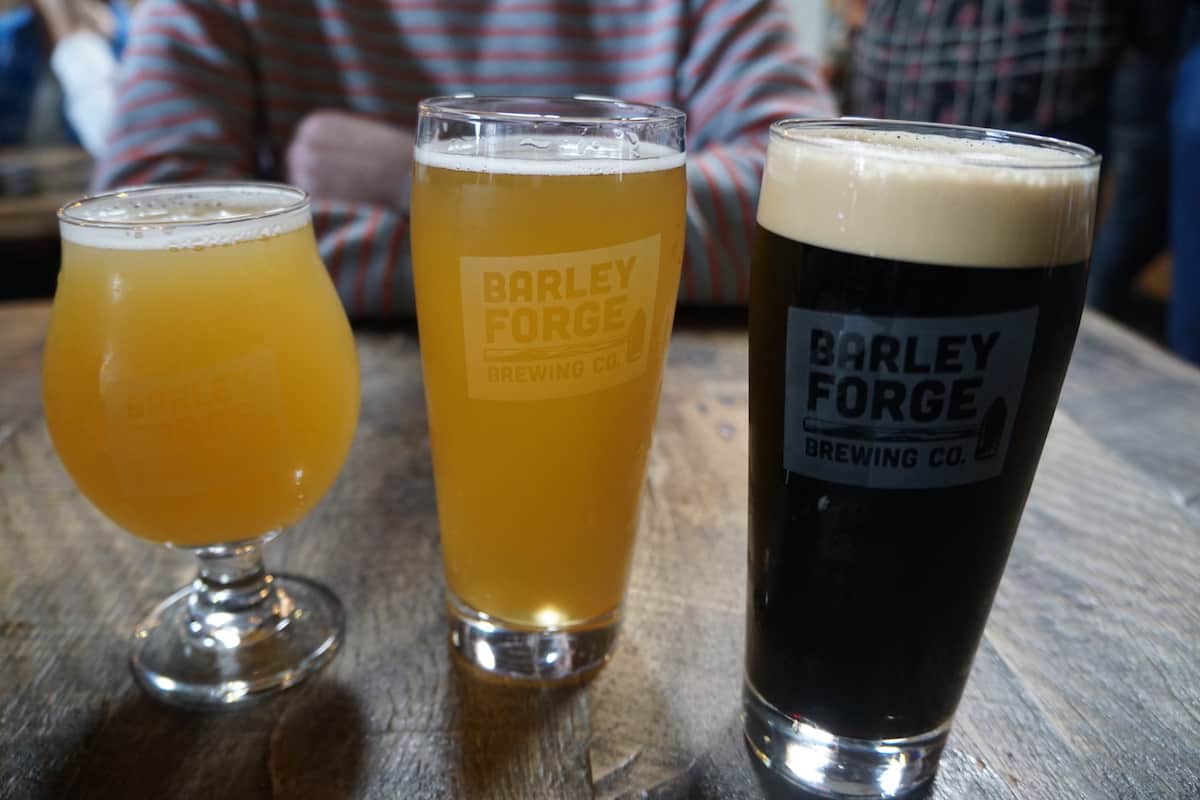 Hoppy or malty, which would you choose? 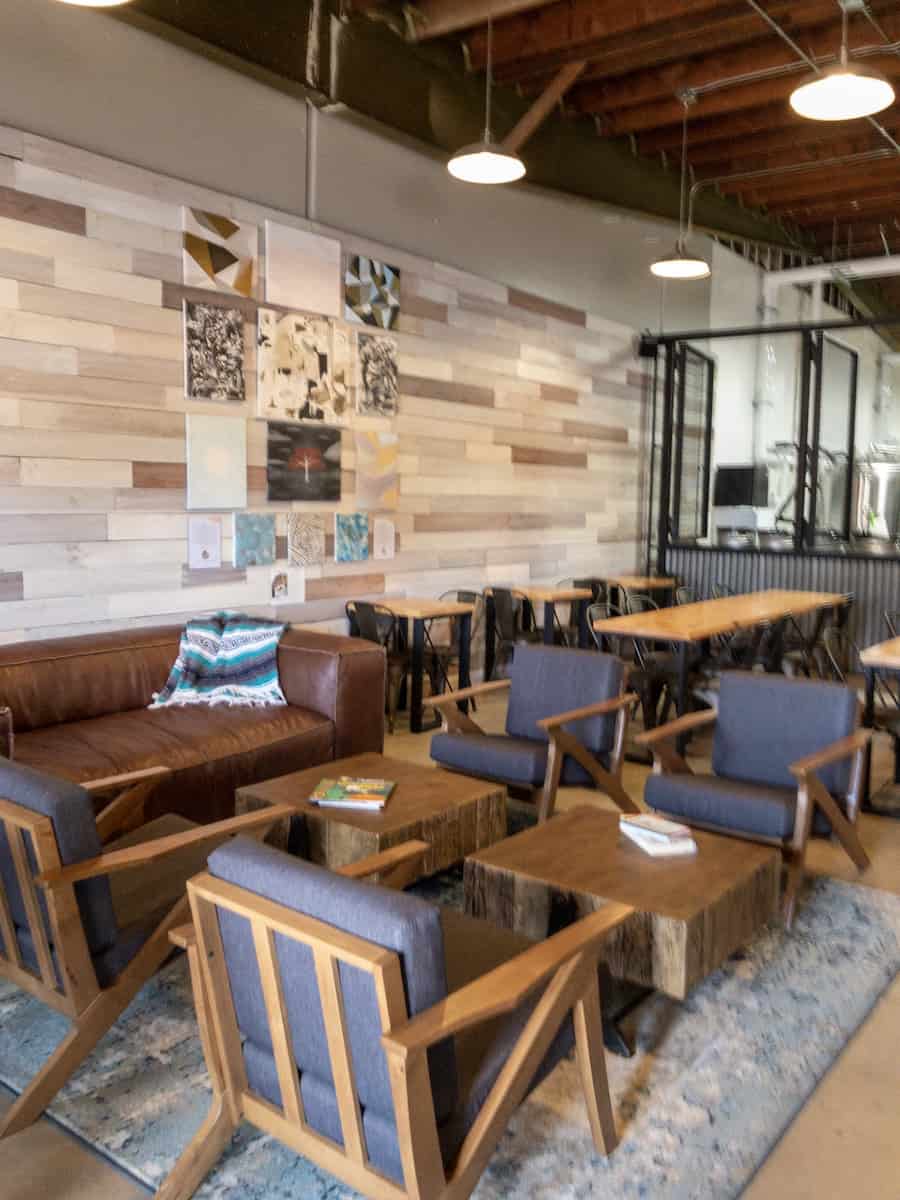 Kick back and relax at Brewing Reserve of California

Fun fact: Stephen had most of the decor including the beer menu boards custom made for BRC.

There are 8 beers on tap with two more coming soon. And yes, one is a stout. 🙂 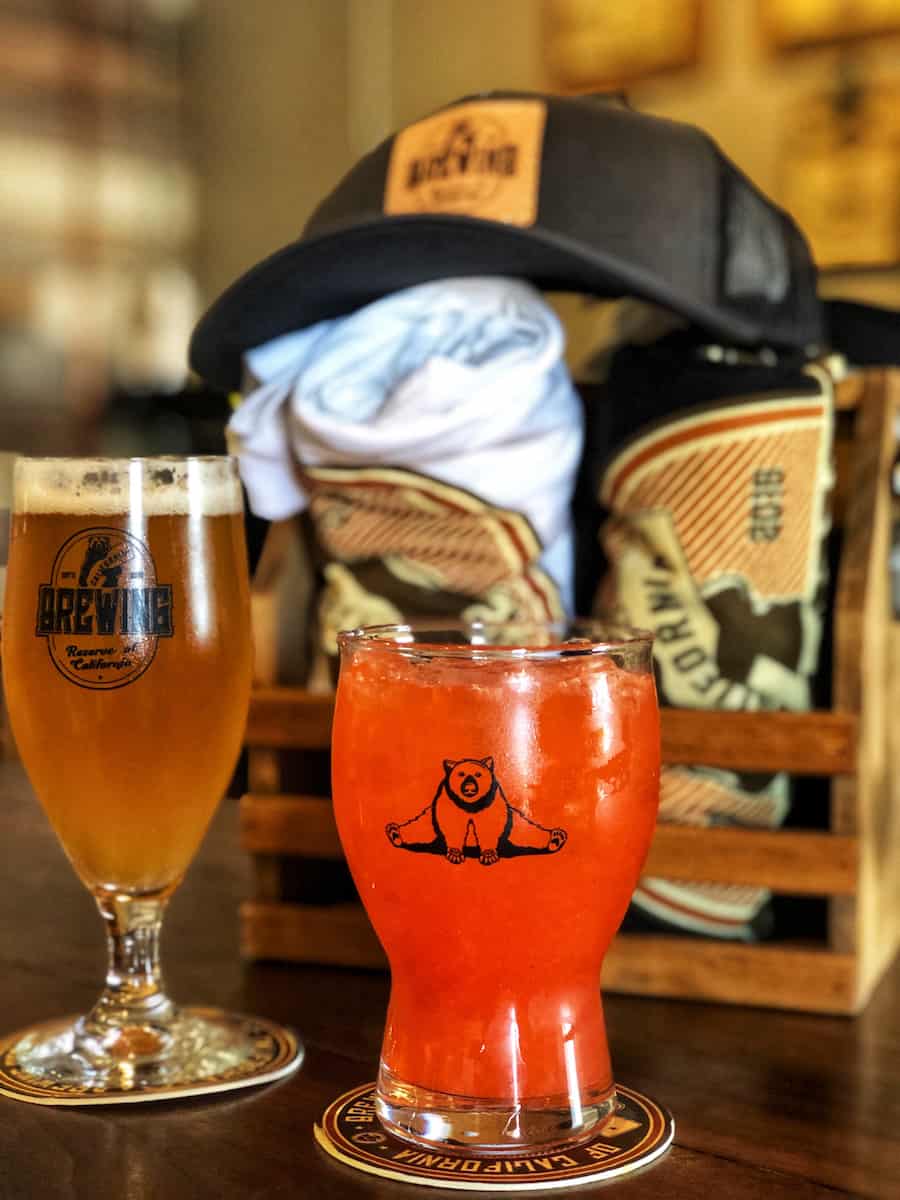 Shandy or a lemonade?

Whether you bring your kids or are a kid at heart you’ll want to try their homemade lemonade made from Meyer lemons. All the flavors make a tasty shandy – half lemonade and half beer.

Pro-tip: They only refill their own growlers.

Karl Strauss Brewing Company is the old dog of the OC brew scene and considered the godfather of the Southern California craft beer movement. The restaurant/tasting room offers 21 house beers and 3 guest beers on tap.

Pro-tip: They offer a Happy Hour from 3 pm to 6 pm Monday through Friday.

Because most of the breweries don’t serve food, you want to plan your brewery tour to include Barley Forge Brewing Company or Karl Strauss Brewing Company. Both breweries have full kitchens with hearty choices that go well with beer.

After a day of hitting all the breweries in Costa Mesa, you may want to spend the night at the Avenue of the Arts Costa Mesa hotel.

If you want to continue brewery hopping, check out this guide to Southern California breweries.

Which is your favorite Costa Mesa brewery?

Pin this to your craft beer and travel boards: 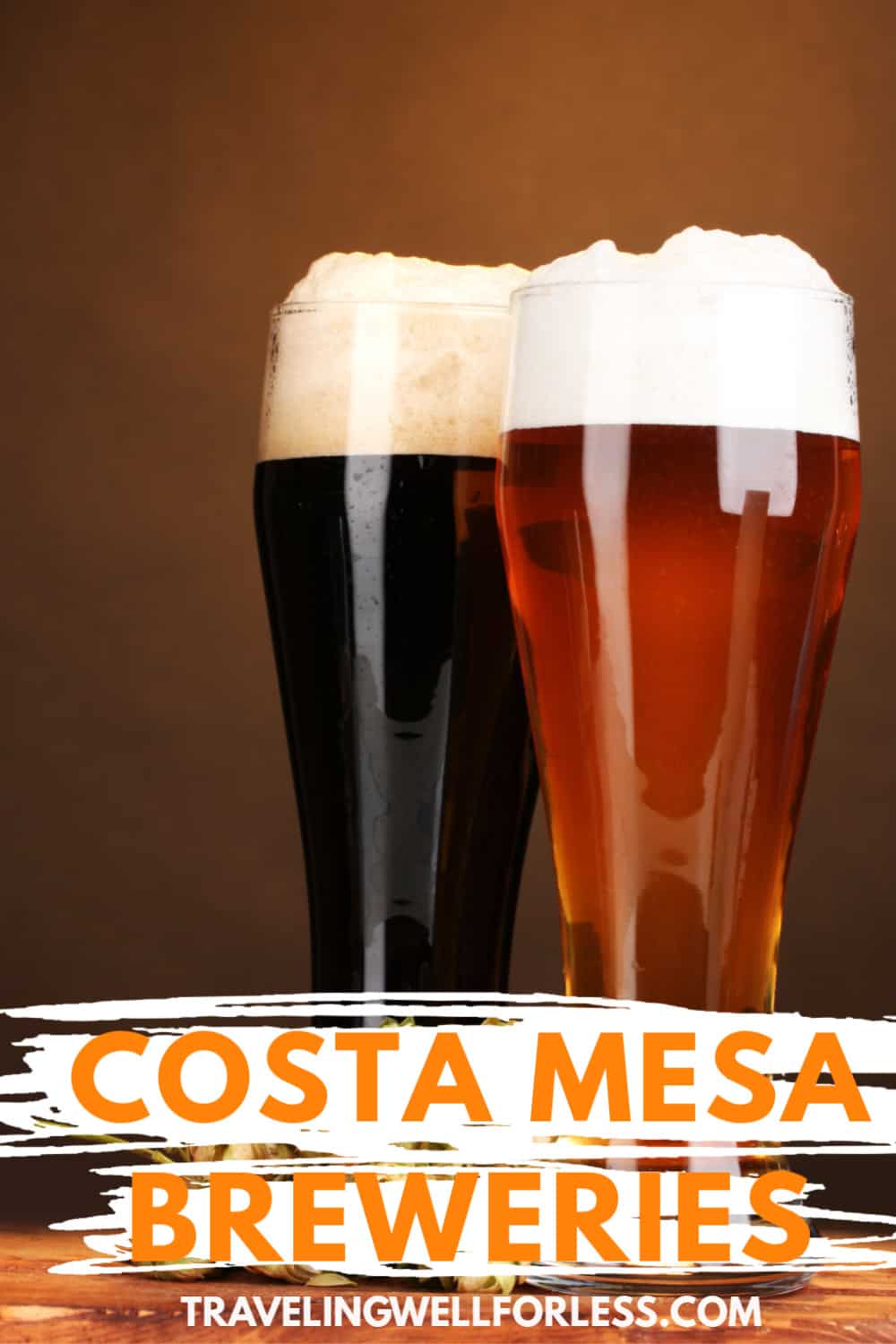 WOW, I had no idea Costa Mesa had so many craft breweries. We randomly visited Bootleggers Brewery, but I didn't know there were so many other breweries in town. Oh and we tried the Black Phoenix, and it wasn't too spicy for me...but I guess we really do like spice a lot. hahaha. And since we love IPAs, it sounds like we must have Gunwhale & Salty Beer on our list for our next visit!

Wow, what a fun itinerary. "Hopping" from brewery to brewery! California is big on microbreweries, that's no secret. It's one of the things I missed since moving north to PNW. Some of the most fragrant hoppy IPAs come from there! I've been down Costa Mesa several times but never bothered to check out their breweries. I'll have to make sure to take notes bookmark this page when I go back!

Definitely check them out the next time you're down this way. A few years ago I did the Bend Ale Trail, you might like it because many of the breweries have IPAs.

I am not a big beer fan. But hubby is. He loves to try the local beers. And visiting small craft breweries such as these is right up his alley. The menu at Bootleggers Brewery has a good selection of dark beers that would tempt him. Although I might be tempted to try the Mint Chocolate Porter. He might also like the Half Full Porter with hints of chocolate from the Salty Bear Brewery. I love when we find good breweries that offer happy hours. A good reason to stop at Karl Strauss Brewing Company. We will keep this list in mind for our next California trip.

I'm not a big fan of beer (I'm more of a wine drinker), but I love visiting breweries to learn more about the process. Every brewery has its own story and the owners put a lot of work and dedication into creating a unique brand and high-quality beverage. I wouldn't mind visiting some of these places in Costa Mesa - I'd choose the ones that serve food as alcohol makes me very hungry!

There are a few places to try wine in Costa Mesa. The Wine Lab is walking distance to most of those breweries.