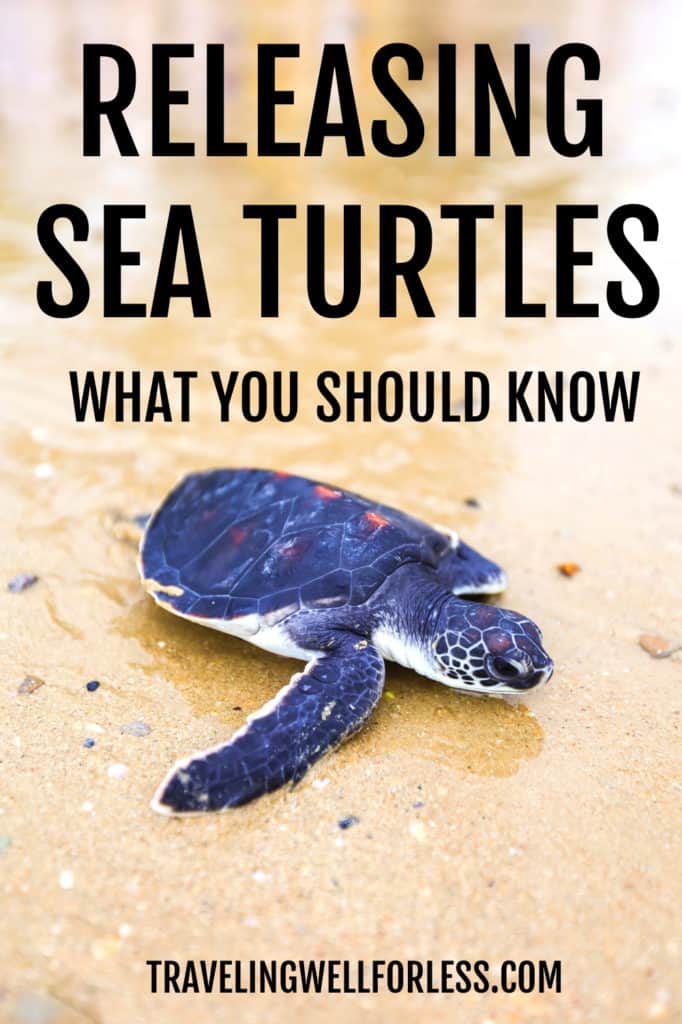 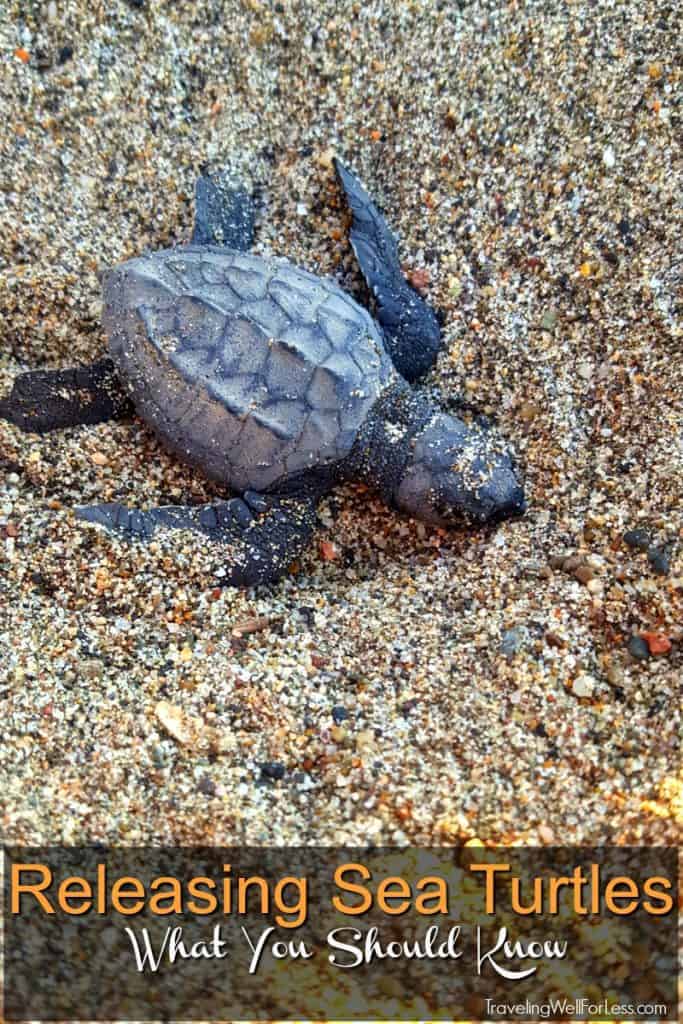 Is releasing sea turtles on your bucket list? It wasn’t something that was on my bucket list. I hadn’t realized how great the experience would be. 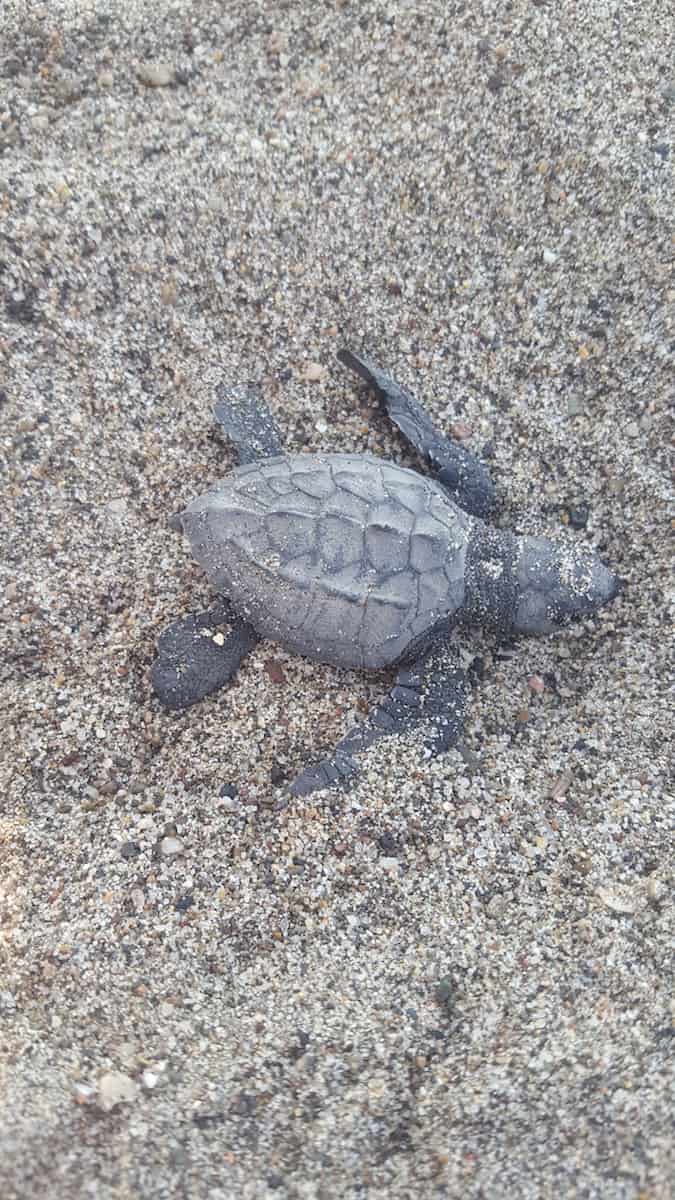 There are seven known species of sea turtles, all are on the endangered list. Poachers present the greatest danger to sea turtles. In Malaysia and Costa Rica, sea turtle eggs are a delicacy.

Female sea turtles return to where they were hatched to lay eggs if they survive. Only 1 in 1,000 baby sea turtles survive to adulthood.

The females lay up to 200 eggs in the sand then return to the ocean. Sand temperature determines the sex of the sea turtles. Temperatures above 85 degrees Fahrenheit result in female turtles.

Eggs hatch in 45 to 70 days. Like the sex of sea turtles, the sand’s temperature plays another important role. If it’s hotter, the eggs hatch faster.

Gliding through the water, you can find these majestic creatures throughout the world’s oceans. Closer to the US, you’ll find sea turtles in Hawaii, Puerto Rico, and Mexico.

The Marriott Puerto Vallarta Resort operates one of the “biggest turtle” nurseries in Puerto Vallarta. Hotel guests can take part in a sea turtle release from June to December. You can release sea turtles for free. There is no cost to participate. 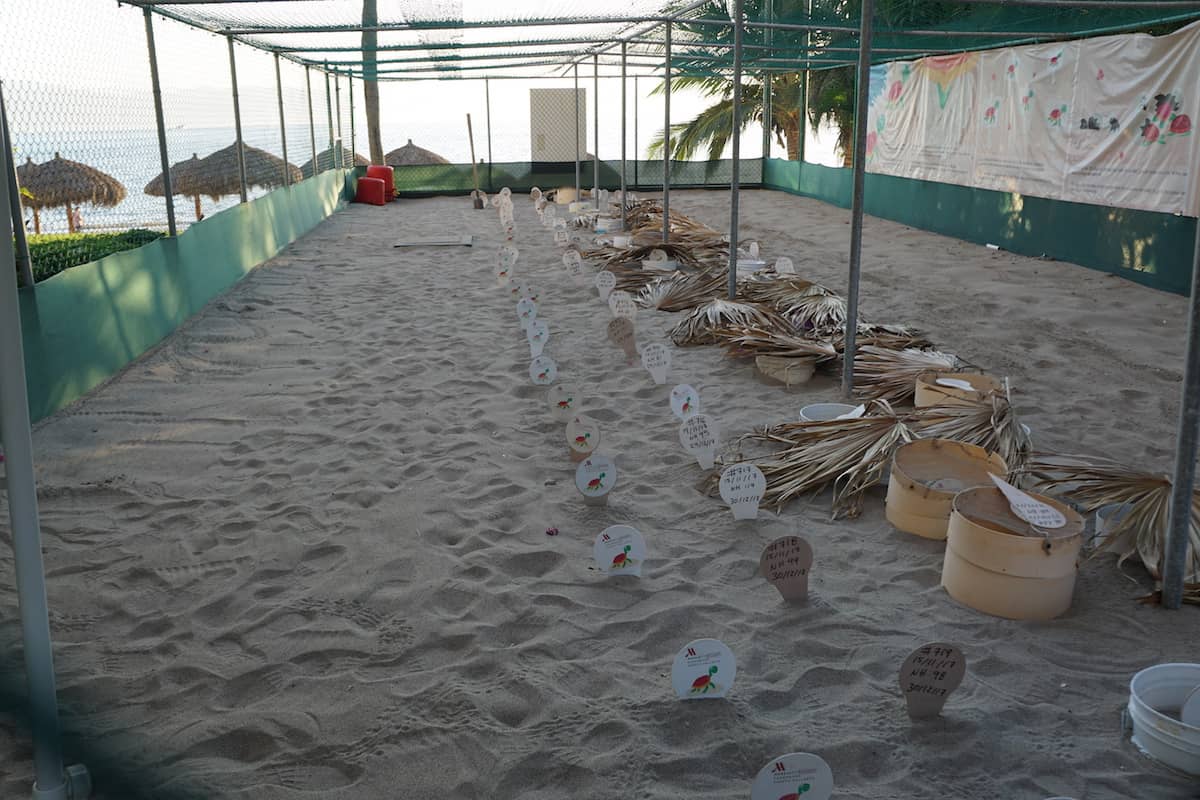 The hotel operates a sea turtle hatchery to safeguard the Olive Ridley sea turtle eggs. When a biologist or volunteer witnesses a sea turtle laying eggs or comes across a newly laid nest, the eggs are carefully moved to the hatchery for safe keeping.

Nests are marked with the date, the number of eggs, and anticipated hatching date. There were 718 nests this year in the hatchery.

Fun fact: The sand in the hatchery has to be replaced every two years. This discourages beach microbes from developing and gives the sea turtles a greater chance of hatching. Replacing the sand also reduces the temperature of the hatchery to ensure an equal balance of male and female sea turtles.

Last month during my stay at the Marriot Puerto Vallarta Resort I got to release sea turtles. As mentioned, it wasn’t a bucket list item for me.

Sure, I like sea turtles. But at the time I didn’t understand the awe and wonder. Until I got to hold a baby sea turtle and watch it fight its way into the ocean.

The sun was setting, the sky was a burst of orange and yellow, and the holiday party had started. “Do you want to release baby sea turtles?”

We made our way down to the beach. The hotel’s marine biologist and volunteers stood guard over a large bucket filled with hatchlings. These baby sea turtles had recently hatched and were eager and ready to hit the waves.

You shouldn’t hold a baby sea turtle because it affects their imprinting process and can break their food sac. So each of us received an empty coconut shell.

A volunteer placed a hatchling in each shell. We cupped our hands over the top so the sea turtles wouldn’t crawl out. When everyone was ready we would release our hatchlings.

Darkness had settled and there were no circling seagulls. Our sea turtles would have a greater chance of survival.

These little guys/girls were ready. Their little flippers scraping the edges of the coconut shell, trying to climb out. My hatchling’s nails tickled my palm.

We put the coconut shells on the sand, tilting them slightly. Once their flippers hit the sand it was a race for survival.

Like a protective mama, I watched my sea turtle climb over mounds of sand to reach the ocean’s edge. The waves lifted its little body into the water. Gently carrying him/her out to sea.

What to Know About Releasing Sea Turtles 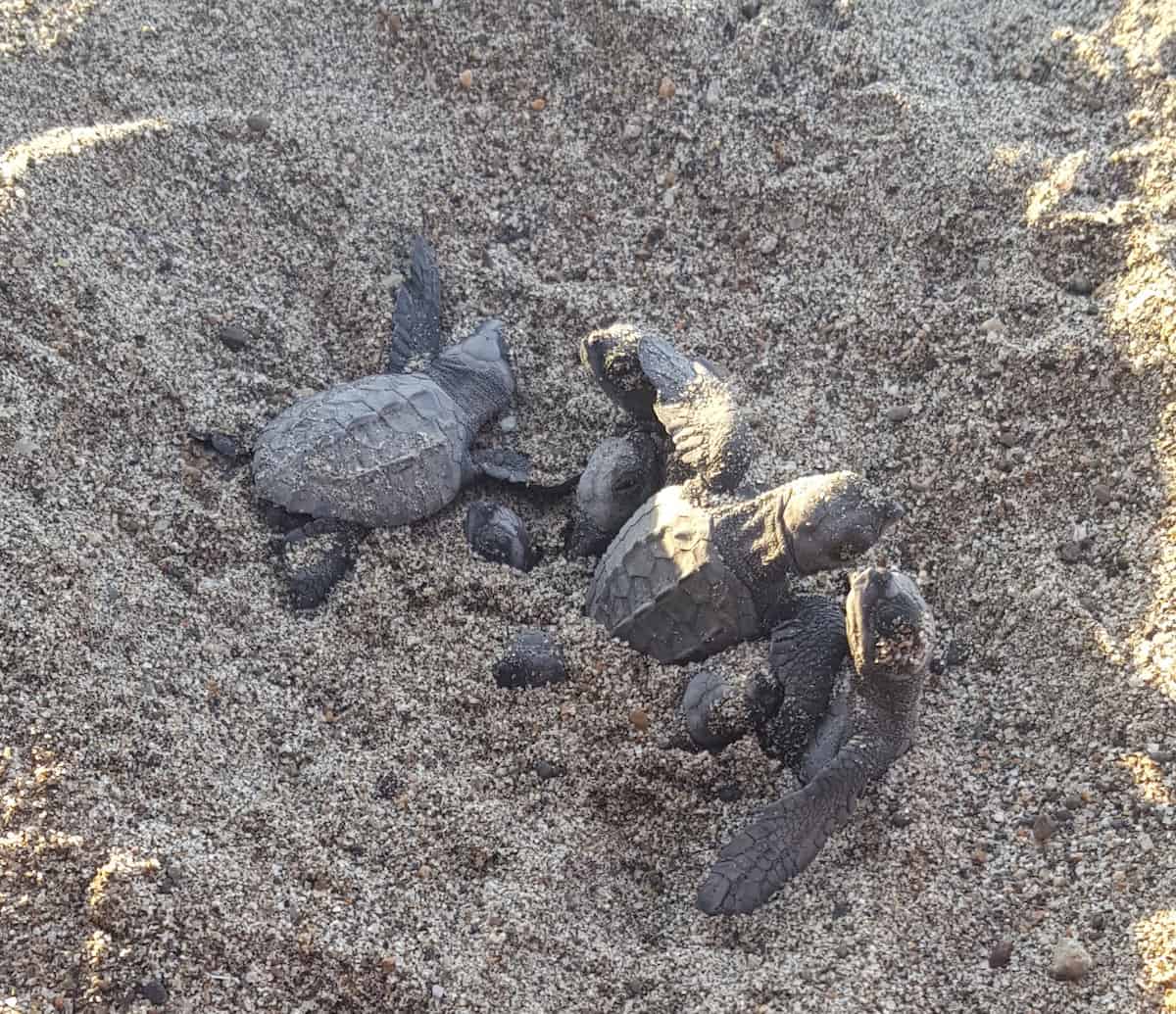 Here’s what you should know about releasing sea turtles. If you aren’t a guest of a hotel that offers a sea turtle conservation program, you can book a sea turtle release tour through companies like Viator.

You can’t touch or hold the baby sea turtles because it affects their survival. They imprint on the sand where hatched. Oils from your skin can interfere with their imprinting process. If you grip them too hard you could break the white dot on their belly which holds three days worth of food.

Pro-tip: If a place lets you hold baby sea turtles in your bare hands, they aren’t committed to the preservation of the species.

Release the sea turtles on the sand, not in the water. Crawling towards the ocean is part of the sea turtle imprinting process. It helps ensure their survival.

To safeguard the sea turtles, they’re released at sunrise or sunset. This helps protect them from predators.

Pro-tip: Tour operators that allow releases during the middle of the day are not in the best interests of the sea turtles.

4.  No Flash or Bright Lights

Bright lights and flashes from cameras and cell phones can disorient sea turtles. Hatchlings could get turned away from the ocean and use their limited energy resources.

Releasing baby sea turtles is a moving and powerful experiences. But if done in the name of profit instead of preservation, can be a horrible experience.

Good thing, there are places like the Marriott Puerto Vallarta Resort where you can release baby sea turtles to save and preserve the species. The biologist said the female sea turtles return in 10 years to lay eggs. I know where I’m vacationing in December 2027.

What was your experience releasing sea turtles?

Pin to your board: 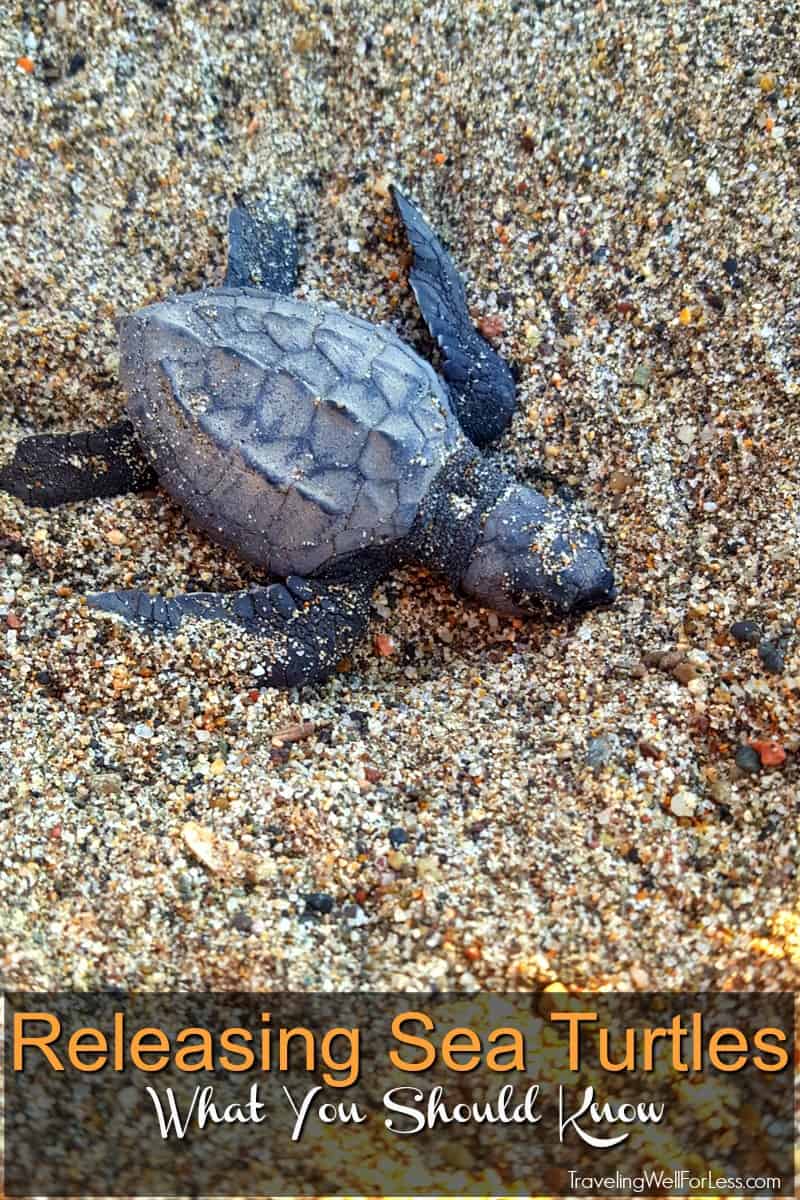 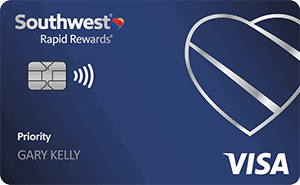 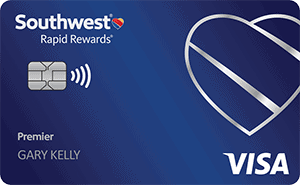 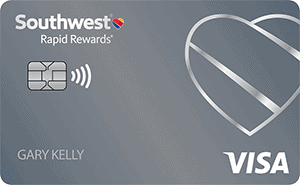 I released baby turtles in Nicaragua 3 years ago in January. It wasn't planned as we just were exploring the country and came upon the nature reserve. The rangers invited us to come back before sunset to help with the release. It was awesome and my husband and I were thrilled to help them out.🐢🐢

Wow this sounds real fun! And I had no idea that baby sea turtles were so fragile and needed so much care.

This would be the experience of a lifetime! I would love to do this on a family vacation. I'm sure the kids would really like to do this and it would leave a lasting impression.

It sounds like a magical experience! I would love to see baby sea turtles making their way into the ocean in person (I've watched it on TV several times.)

What a wonderful posts. I love sea turtles. They are such neat animals. One of my favorites too. I would love to see this myself.