While it’s not door to door service, it’s less of a hassle than some of the other ways to get to LAX. And it’s cheaper than using a shuttle.

Tesloop from San Diego to LAX 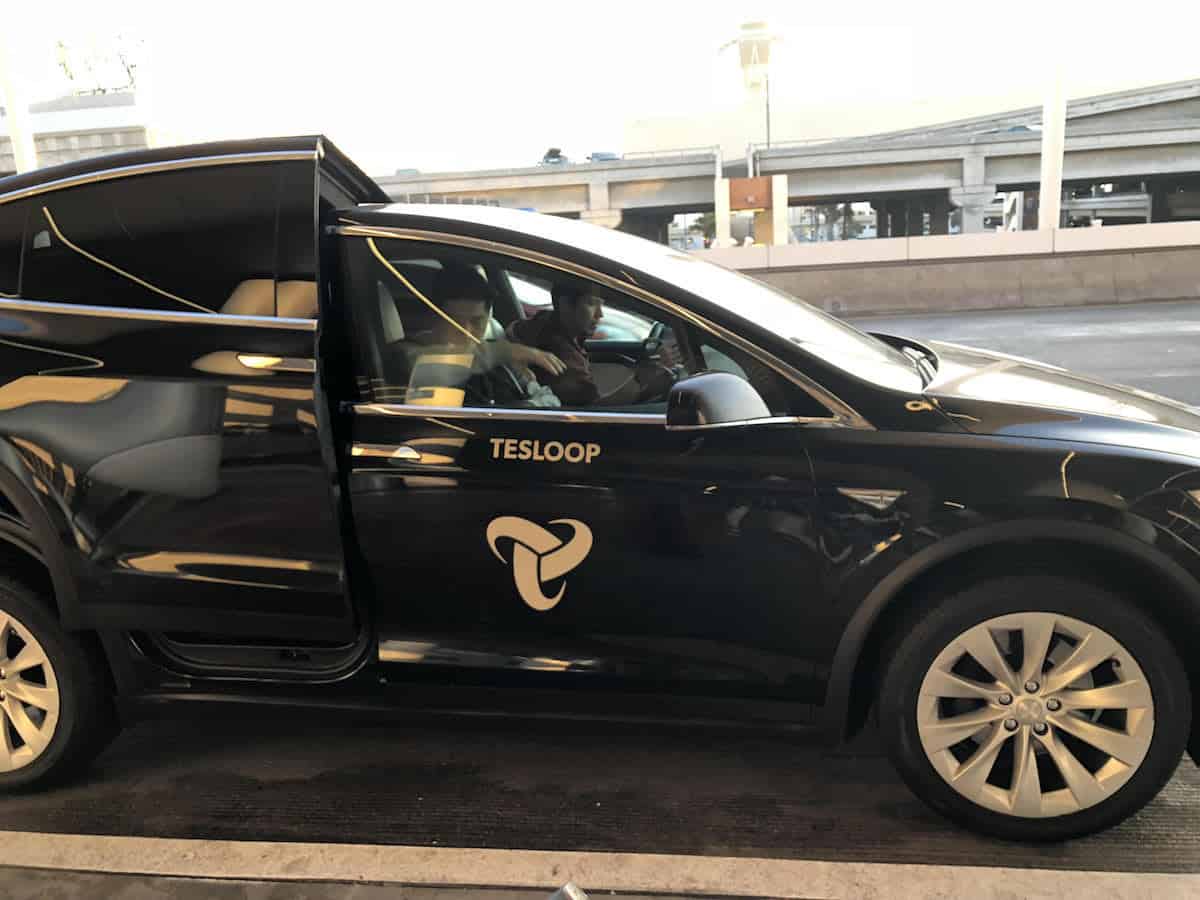 Think of Tesloop as a fancy shuttle without the door to door service. You get to ride in a Tesla to LAX instead of a multi-passenger van.

Tesloop is a ridesharing service that uses Teslas to transport people between select Southern California cities.

Drivers are called pilots. They “drive” self-driving Tesla Model S cars. Basically, they keep their hands on the wheels and are available in case something happens.

Read my post – Tesloop: Everything You Need to Know.

Before booking my loop I read everything so I could make an informed decision.

It’s not like using Tesloop is life or death but when you’re banking your ride to LAX from San Diego on something new, you’re taking a huge chance.

Trusting a new service can be nerve-wracking. It’s like putting all your chips on one number when playing roulette. It could pay off big but if it doesn’t then you’re out of luck.

Because even though there are lots of ways to get to LAX from San Diego, you have to make advance arrangements. Because it can take 2 hours without traffic. So if you miss your ride, you could be SOL.

And Tesloop isn’t inexpensive. It costs more than renting a car or taking the train.

After feeling confident that I wouldn’t miss my flight if Tesloop didn’t show up, I booked my loop. 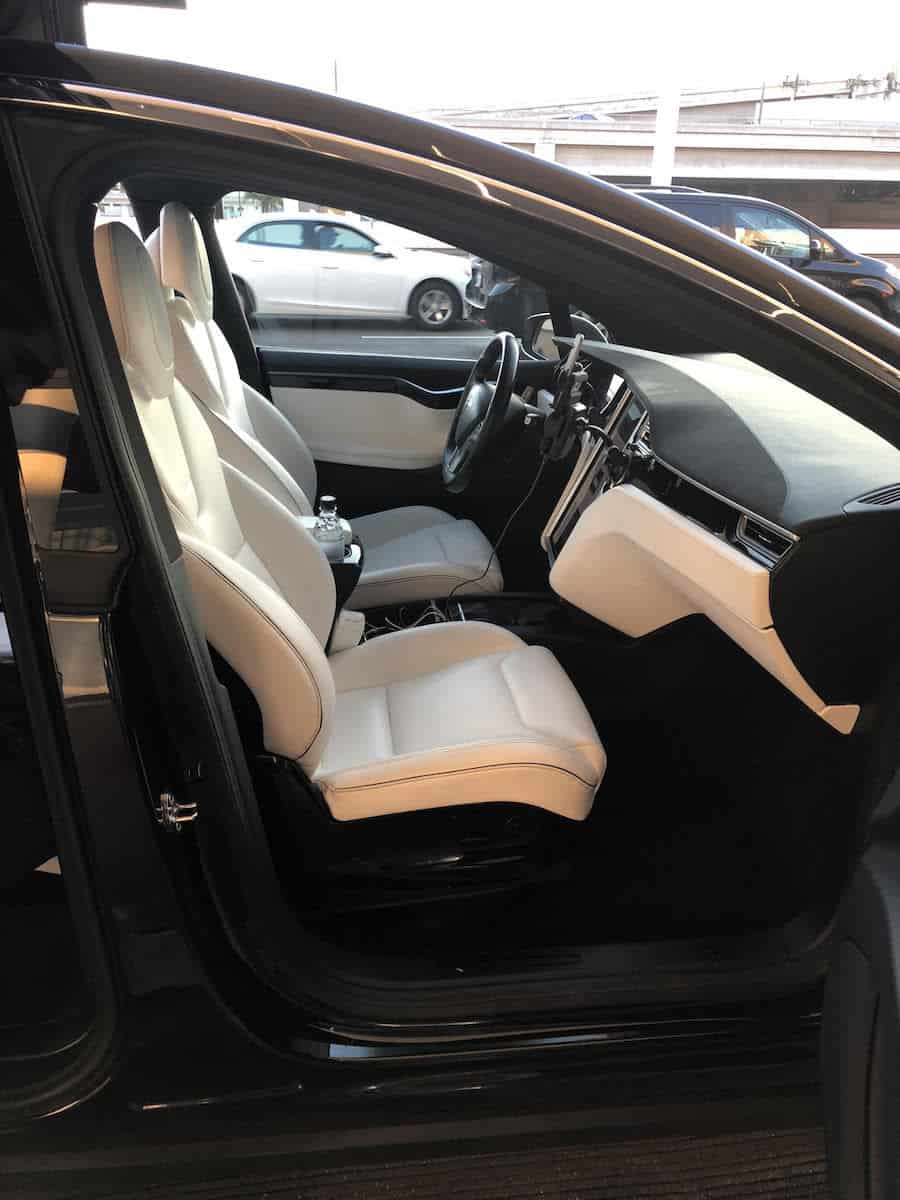 When I rode with Tesloop from San Diego to LAX on January 5, 2018, I could pick my seat and all three rows of seats could be booked. The last row of seats was cheaper than the first two rows.

I’m a big fan of saving money. But I wasn’t sure how much legroom there was in the back seats, so I chose the front seat, shotgun.

But due to their new Transportation Charter Permit, all seats are first come, first served, only the first two rows of seats can be booked, and all seats are the same price. So if you want to ride shotgun, you have to hope book first. 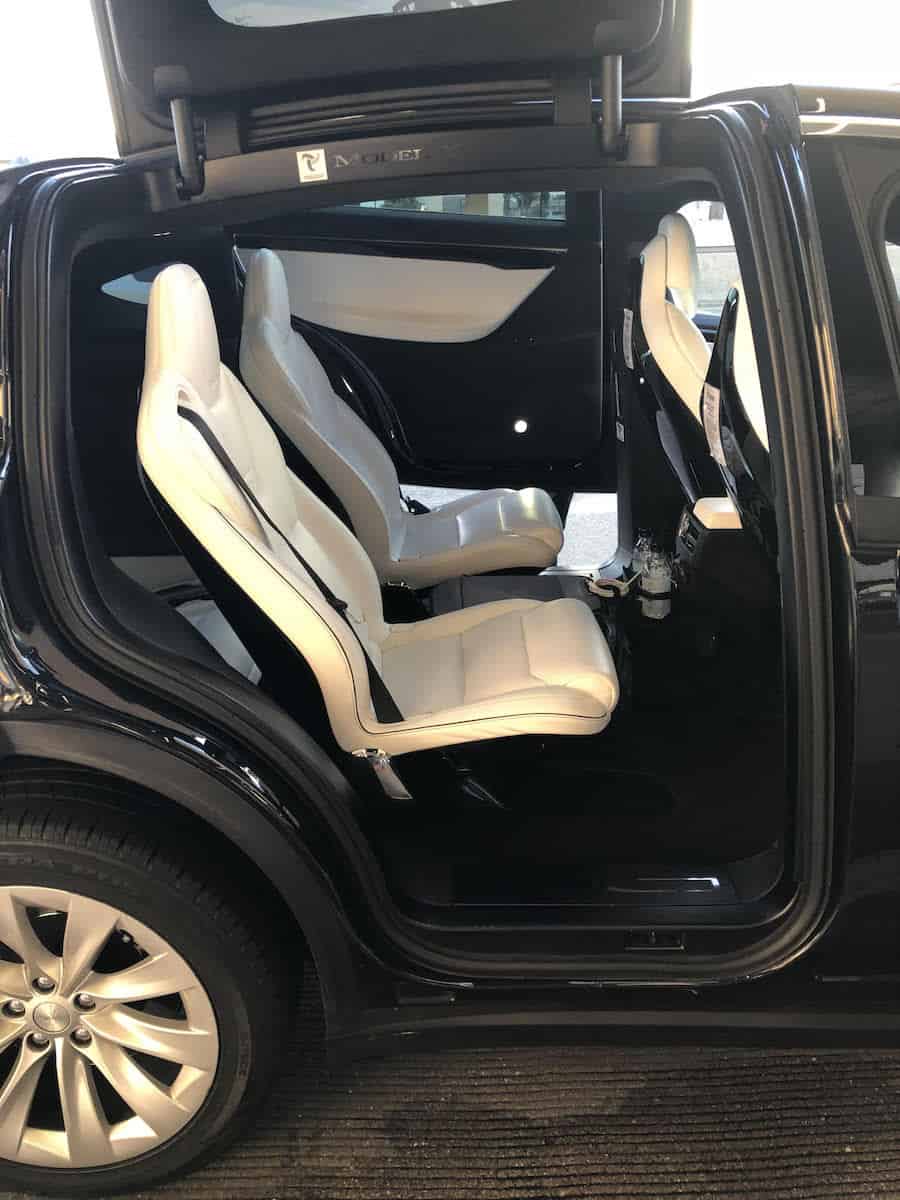 What You Need to Know Before Your Tesloop Experience 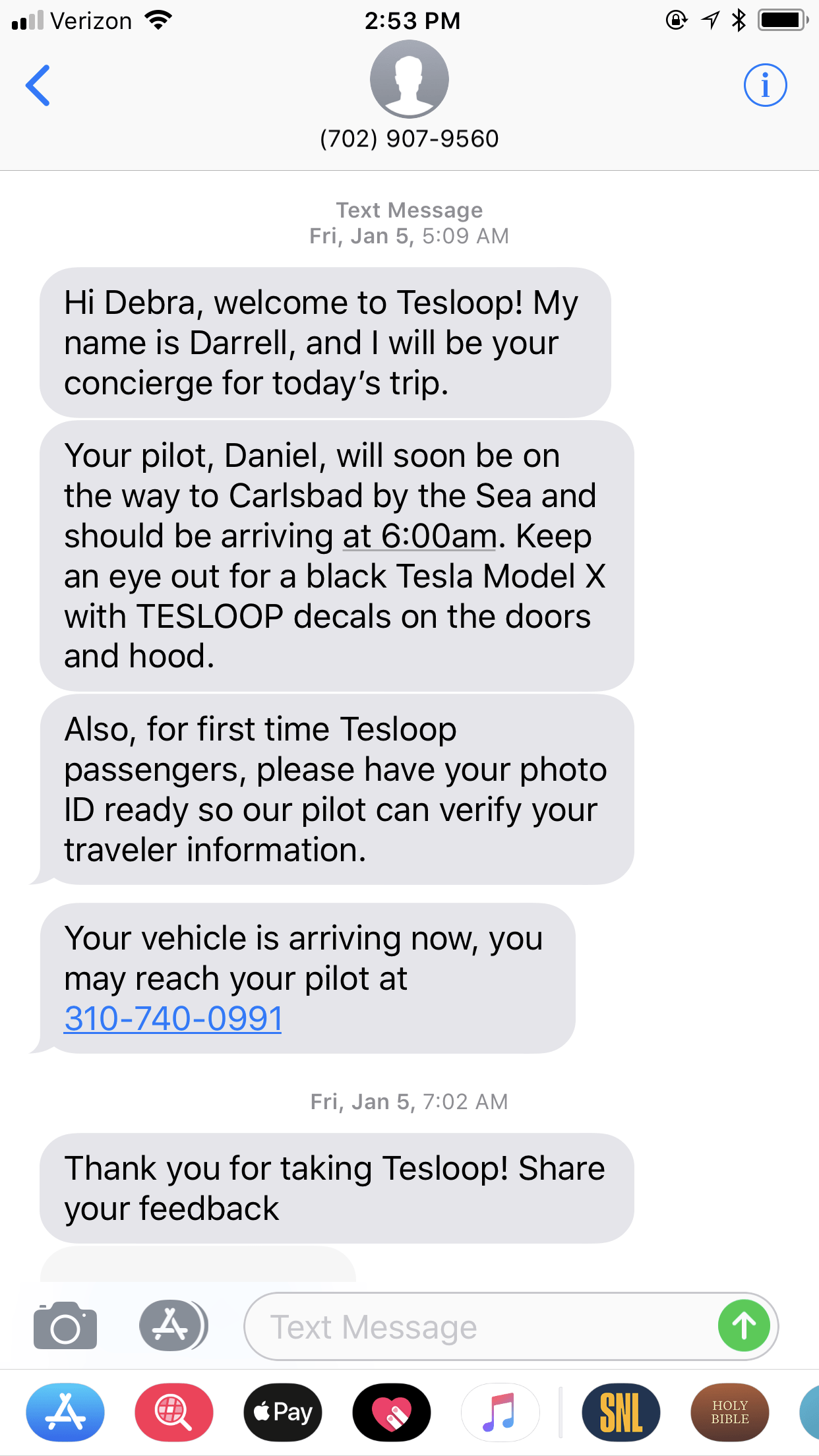 You may or may not get notifications before your loop.

Twenty four hours before my loop, I hadn’t heard from Tesloop. The only contact I received was my booking confirmation. I was starting to get worried and almost called the Tesloop Concierge.

But I held off because I wanted to see how Tesloop customer service would respond if there was an issue with my loop.

If my loop didn’t show up, I wouldn’t miss my flight. Because there was one more train that would get me to LA in time for my noon flight.

Thankfully, I got a text one hour before my pickup. And a second text when the pilot was arriving. 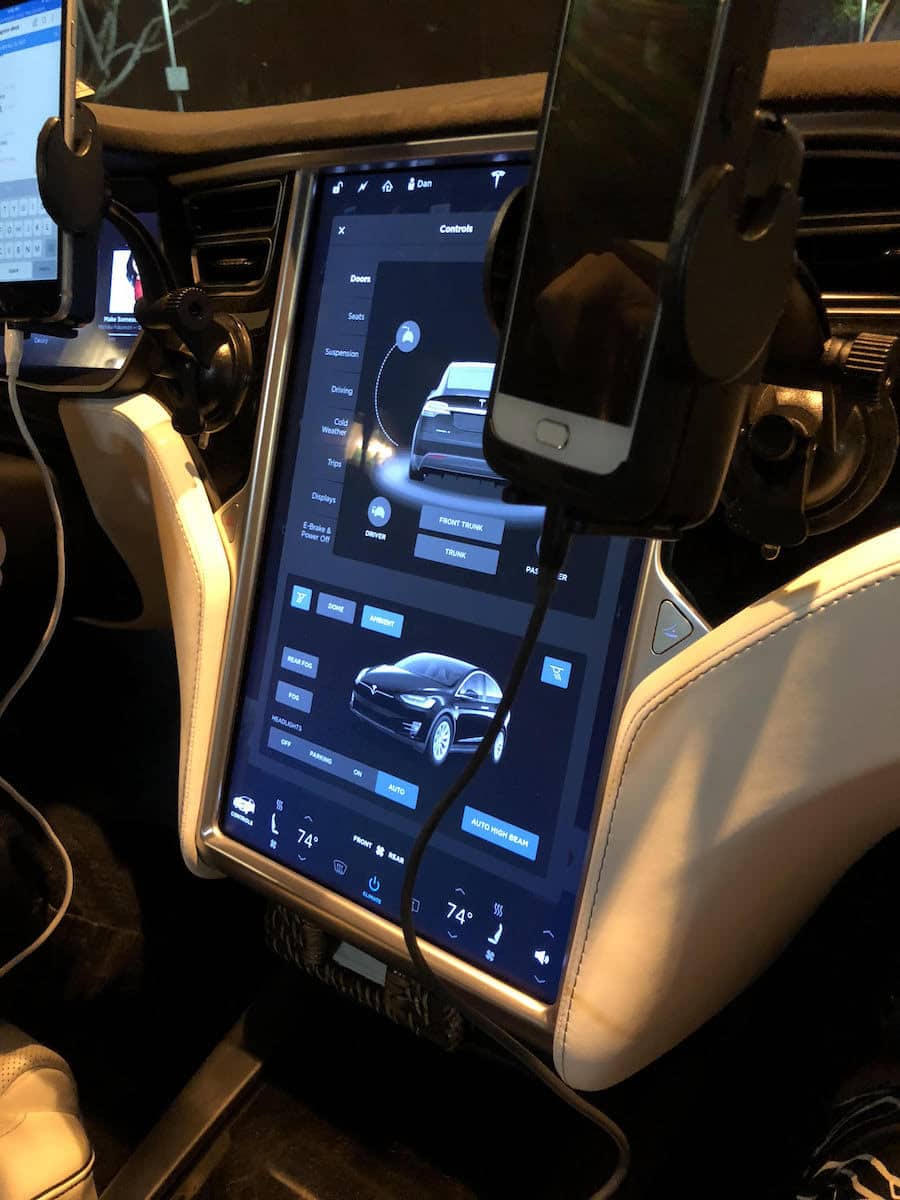 My loop included three other riders and our pilot, Daniel. Daniel offered everyone a travel pillow and snacks from the healthy snack cooler. He also confirmed that everyone agreed to the same radio station.

Because Tesloop is a shared ride, you’re subject to the manners of the rest of the riders in your car. I got lucky and everyone was polite.

No one talked on their cell phones. Nor brought any stinky food or snacks. Maybe because it was a 6 am loop and they were sleeping?

About 20 minutes into our ride, our concierge, Darrell, called. Darrell explained our Tesloop worked.

Right before my Tesloop arrived, I got an email that my flight was delayed. In the car, I logged into the free onboard Wi-Fi to research alternative options.

The Wi-Fi worked great. The speed was fast and the service reliable. There was only one instance where it froze but that was around San Onofre and only lasted less than a minute.

If you need to charge your phone, there are plenty of phone chargers and a laptop charger. The adapter for my laptop was sturdy and easy to use.

Pro-tip: There’s only one laptop adaptor. And it only has one plug. So if you want/need to use it, be sure to ask right away.

Dropping Off at LAX 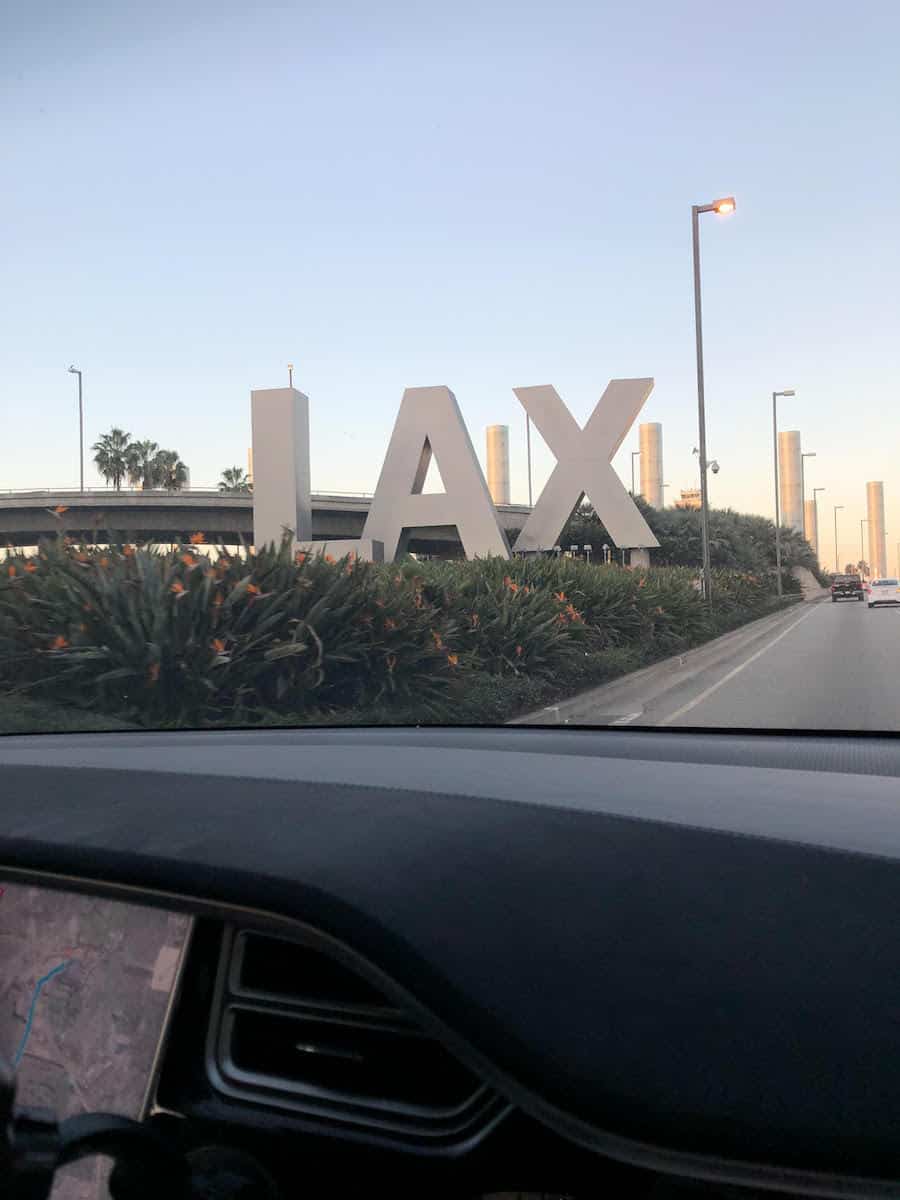 About 20 minutes before you reach your destination you’ll get a survey via text. When you complete the survey you’ll get a referral code so you can offer friends a discount, but it’s only valid for 17 days.

Our Tesloop pilot dropped off us at the departure area for our flights. Drop off was seamless and Daniel got our bags out of the car.

Pro-tip: At the end of the survey, there’s a link so you can tip your pilot.

If you’re looking for a way to get to LAX from San Diego consider using Tesloop. Tesloop can take you from San Diego to LAX in style and comfort in a Tesla.

You’ll share the ride with up to 2 other passengers. Unless you get lucky and are the only passenger. Which can happen sometimes or you book the entire car.

I’m a big fan of Tesloop. Tesloop is more expensive than taking Amtrak but it’s a lot cheaper than a shuttle. It’s worth paying a little more than Amtrak for reliable, fast Wi-Fi and terminal drop off. Plus it’s a nicer ride.

Tesla or van? Which would you pick?

The Chase Sapphire Preferred is the best card for beginning travel hackers. It is the first card you should get to start traveling for free because the welcome offer is 80,000 points & a $50 statement credit on groceries your first year after spending $4,000 in the first three months.

The Chase Freedom Unlimited is one of my favorite cards for earning cash back card and travel rewards. It offers a welcome offer of $200 after spending $500 in the first three months. 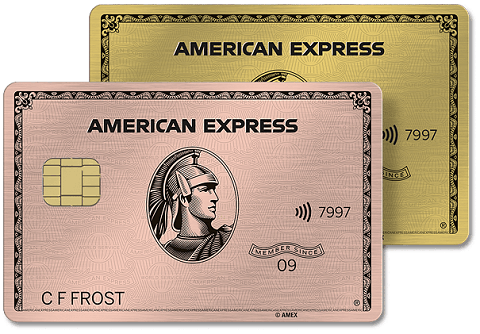 The American Express Gold is a great card for earning travel rewards from grocery and restaurant purchases It offers a welcome offer of 60,000 points after spending $4,000 in the first six months.

My favorite perks about this card are earning 4X points at US grocery stores, 4x points at restaurants (including delivery and takeout) worldwide,, $120 statement credit at restaurants, 4x points on UberEats, $120 in UberCash (use for UberEats or rides),3x points on flights booked with the airlines or via amextravel, and 1x point on everything else. 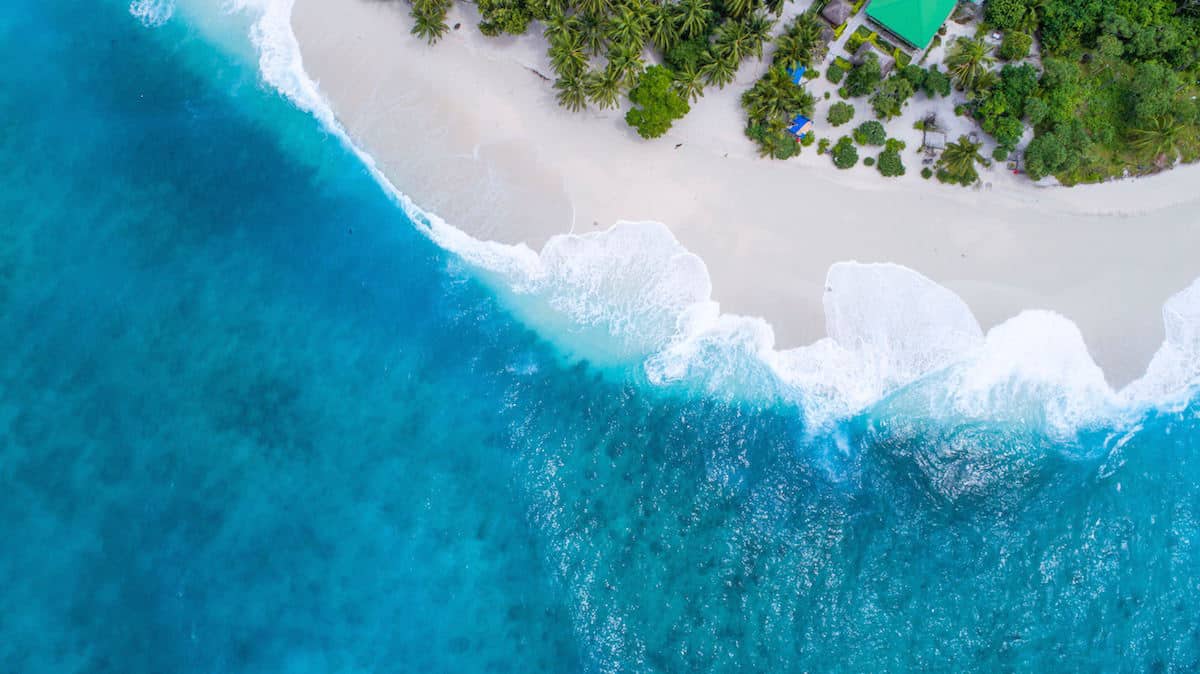 ← Previous
Why You Shouldn't Book Your Ticket Using ThankYou Points 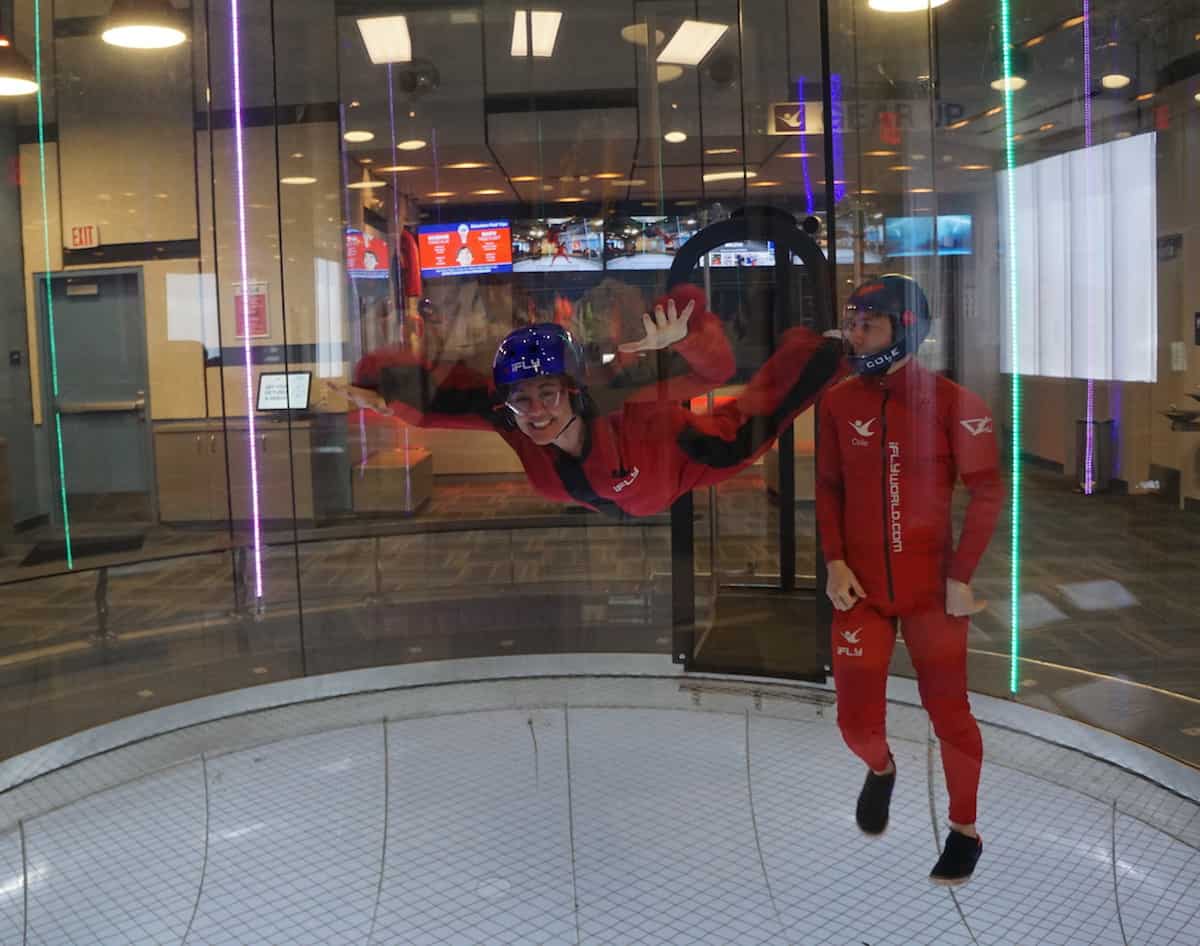