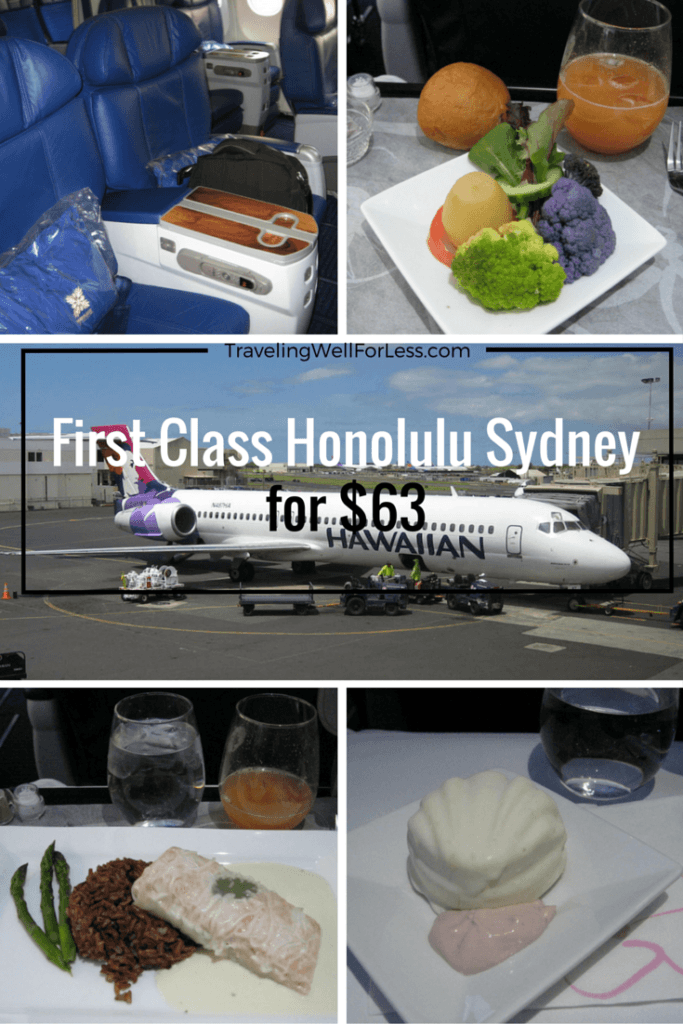 Update: The credit card offer in this post is no longer available. Check our credit card page for the latest offers.

People always ask, “What’s the favorite place you’ve visited.” I love all 33 countries I’ve been to, but Australia ranks high on the list. Our first trip to Australia (and Tahiti) was in 1994. That visit cemented a deep love for Australia. And it was the catalyst that got me started collecting miles and points. Which is how we got a luxury vacation to Sydney practically free: The How to Luxury Guide to Sydney on $85 a Day. Keep reading for our First Class Hawaiian Airlines Honolulu Sydney Flight for $63. 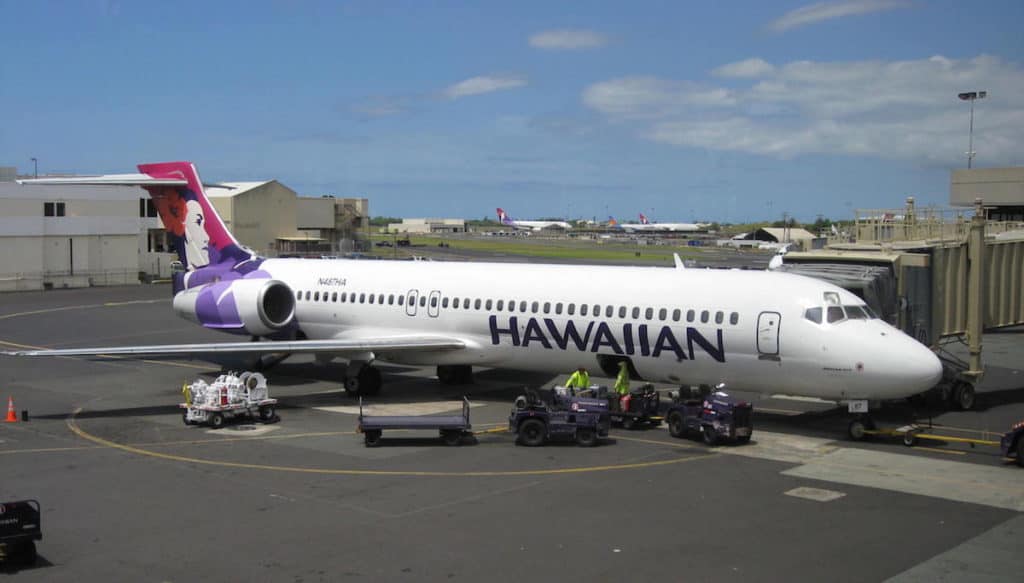 In 1994 we spent a week in Brisbane and the Gold Coast. This time we choose Sydney. The thought of seeing the world famous Sydney Opera House and climbing the Sydney Bridge was enough to convince us. But what sealed the deal was that you can use hotel points to stay in Sydney.

To maximize the best use of hotel points we stayed at four hotels: Best Western Plus Hotel Stellar, Radisson Blu Plaza Hotel, Hilton Sydney Hotel, and the Park Hyatt Sydney. But you can pick just one hotel and stay there for your entire trip. It’s definitely easier if you don’t want to unpack and pack several times…

A trip to Sydney is expensive, but you can do it for cheap. First Class Hawaiian Airlines Honolulu Sydney flights one-way cost $5,565. But we only paid $63. Our entire $26,000 trip to Australia only cost $208! Here’s how we did and how you can do it too. 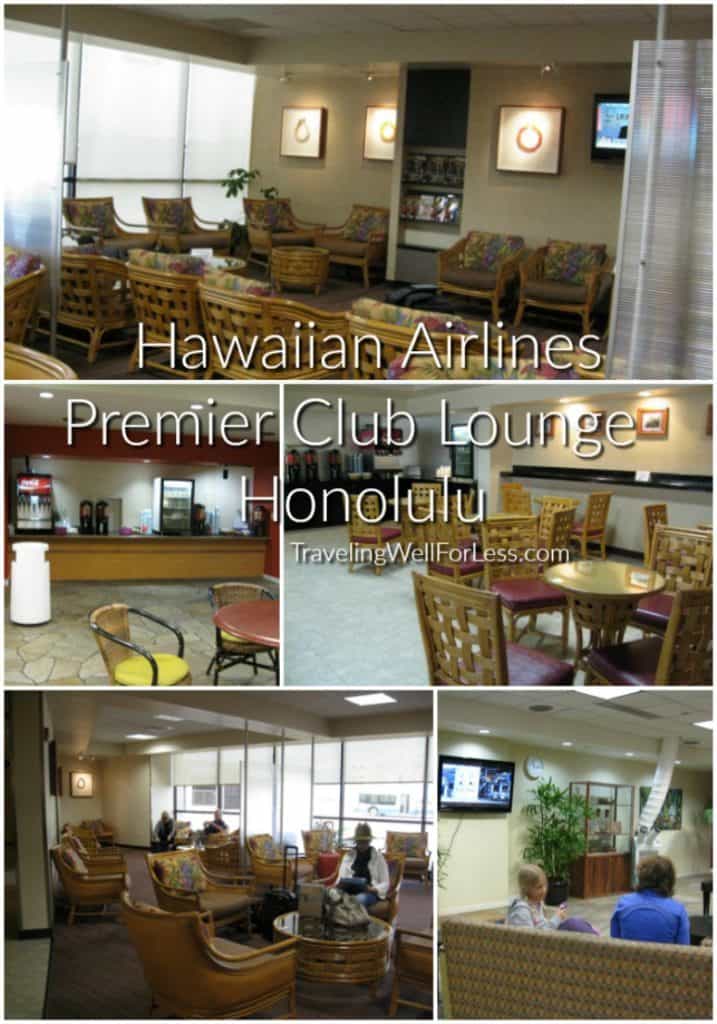 Nothing to see here folks, move along

The Hawaiian Airlines Premier Club Lounge at the Honolulu Airport was not impressive. I’d go as far as calling it a Hawaiian themed waiting area at a car dealership. There weren’t any snacks, just small single servings of POG (pineapple, orange juice, and guava), soda, and coffee. The padded wicker chairs made for uncomfortable seats. But there’s free Wi-Fi and a TV. 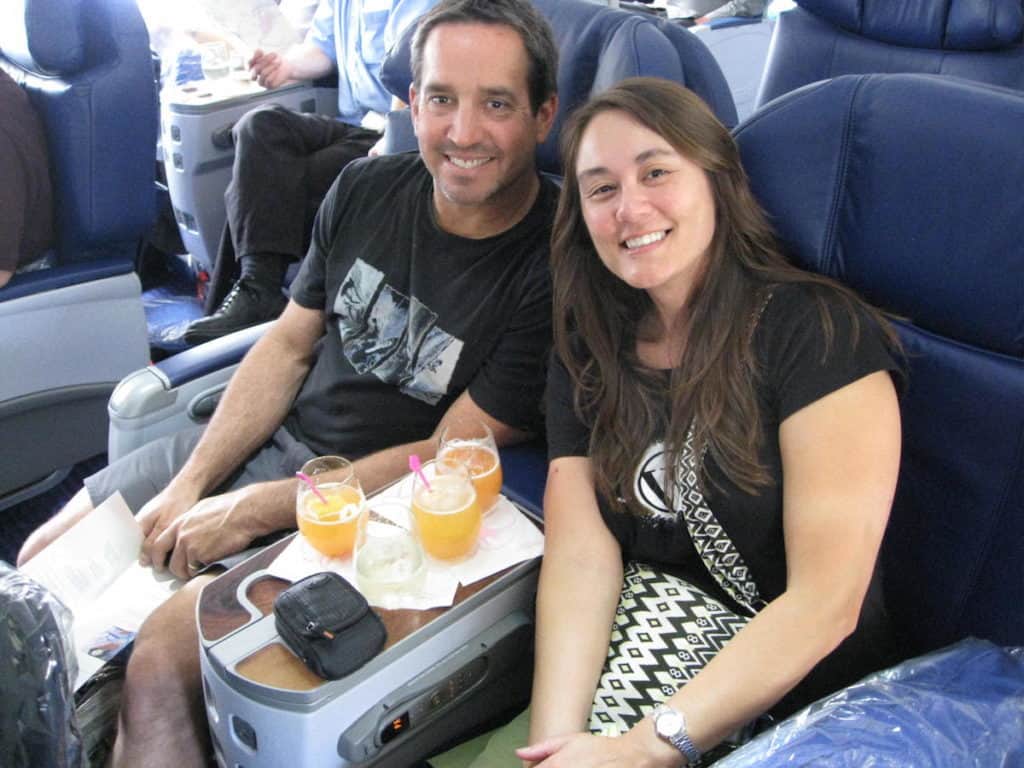 We’ve flown coach on the prop planes when flying from one island to another. But this was our first time flying on Hawaiian Airlines Airbus A380 First Class.

Pre-departures drinks were offered: Na Pua (guava juice and champagne), champagne, and guava juice. It would be rude to say no. 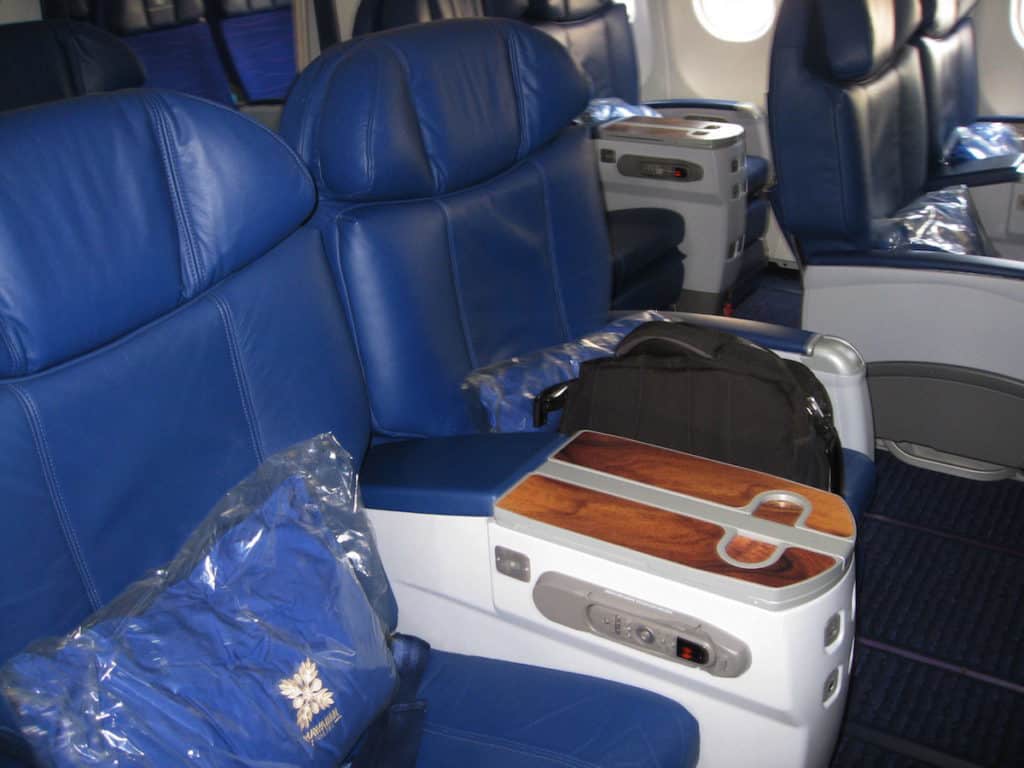 Leather seats but not lie flat 🙁

The 9 seats in First Class were in a two-two-two configuration. We choose Seats 2C and 2G because there wasn’t going to be much to see for the almost 11 hour overwater flight. And this way, Jeff didn’t have to step over me to use the restroom during the flight. Hawaiian Airlines now flies an 18-seat A330 between Hawaii and Australia.

The seats recline, much like domestic First Class. The only difference between seats on a domestic flight and these seats, were the footrests, controls, and a few other things. But for a long-haul international flight, they really need to have lie flat seats. Good thing, those are coming soon! 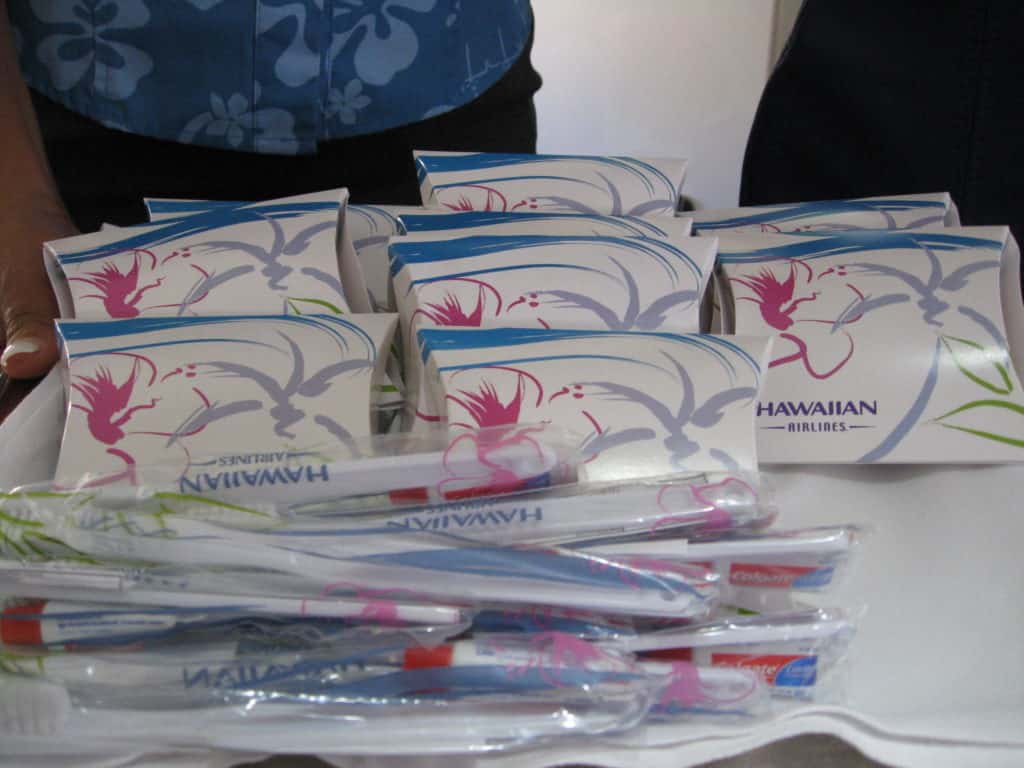 Some goodies to freshen up

The flight attendant brought the amenity kits and dental kits. The paper pillow box kits had an eye mask and ear plugs. Disposable slippers were in the back pockets of each seat. 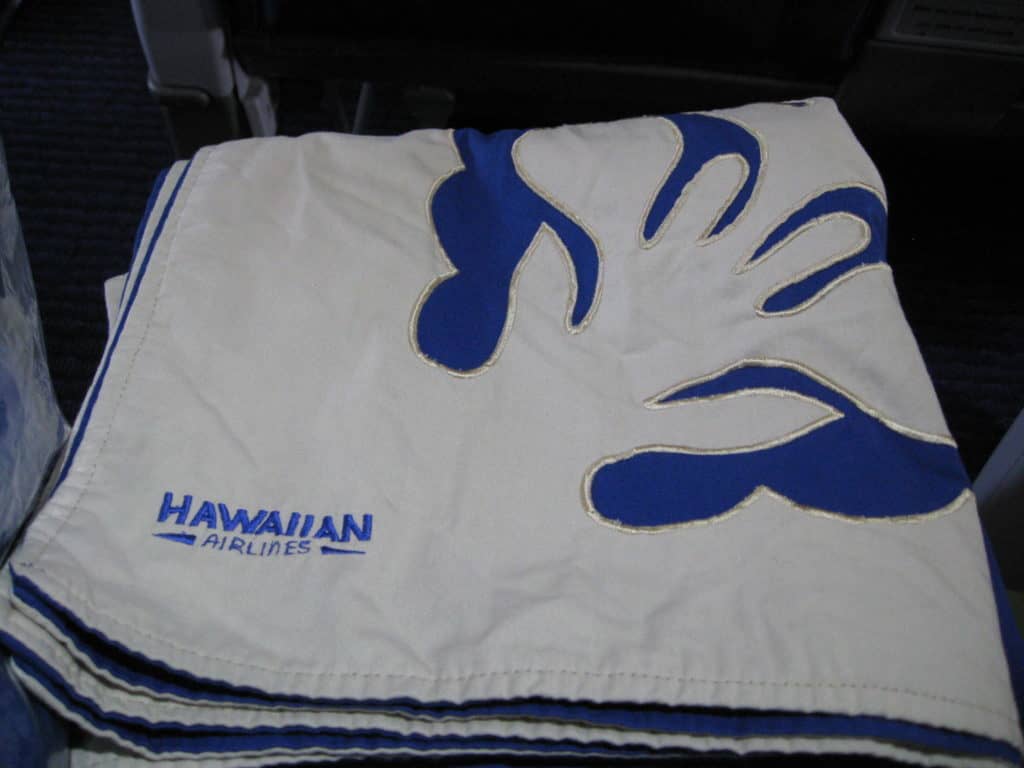 After take-off we were given a Hawaiian patterned quilt type blanket and pillow.

The in-flight entertainment (IFE) was stored in the armrest and had plenty of movies, TV shows, music, and games to keep us occupied. I rarely go out to movies at home so I watch the latest movies during flights. So it’s no surprise that I rarely sleep on flights. 🙂 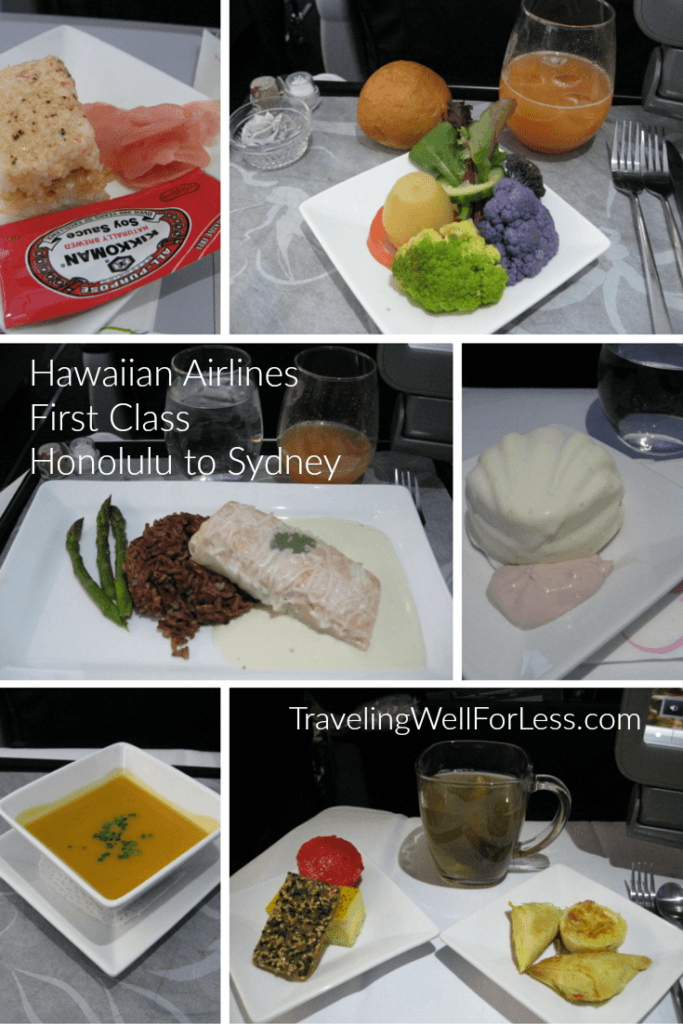 How You Can Do It Too

The easiest and fastest way to get airline miles for a trip to Sydney is by applying for credit cards.

I am not a credit card affiliate. So I do not earn a commission on credit cards.

All three of the Citi American Airlines cards are offering miles:

By applying for the Hawaiian Airlines card and spending $1,000 on purchases in the first 90 days, you’d get 35,000 Hawaiian miles.

And if you have a business, you could get 35,000 Hawaiian miles after your first purchase with the Hawaiian Airlines Business card.

We spent a week in Sydney for only $85 a day and that included our flights, hotels, meals, activities, and transportation. The total cost just under $595. Two one-way First Class Hawaiian Airlines Honolulu Sydney flights cost $5,565. But we only paid $63. The trick…we used frequent flyer miles.

Here’s our experience flying from Honolulu to Sydney on Hawaiian Airlines in First Class aka Business Class.

While the seats for our First Class Hawaiian Airlines Honolulu Sydney flight weren’t the most luxurious compared to other international First Class seats like Cathay Pacific or Etihad, it sure beat coach! And if you’re flying from Hawaii and can’t find seats on Qantas, at least you’ve got another option with Hawaiian Airlines.

When was the last time you flew Internationally First Class or Business Class in a seat that didn’t lie flat?

Pin this to your travel tips, travel hacks, travel, or vacation board